What is “7 Mountains” theology?  Supposedly there are “7 mountains” of global society – Media, Government, Education, Economy, Religion, Entertainment and Family. Conquering these areas of influence is the key to taking a nation for the kingdom of God.  The 7 Mountain mandate is the brainchild of the Dominionist movement.  Over the years Dominionists have gone by many names including Latter Rain/Kingdom Now /Joel’s Army/Manifest Sons of God and most recently the New Apostolic Reformation (NAR).  Modern day “apostles” and “prophets” have a plan to aggressively “retake the reins of our country” for Christ. In other words, they believe that Christians must occupy and subdue the world as God’s stewards of the earth.  Moreover these people believe it is a Christian’s duty to go into the world using “spiritual warfare” tactics to crush evil before Jesus Christ’s final return.

So guess who’s one of the movers and shakers in the apostate NAR movement?  None other than “apostle” Rafael Cruz.  For those who don’t know who this man is, he’s Sen. Ted Cruz’s father.

With this background in mind, take a look at Herescope’s brief overview of the 2016 presidential campaign. 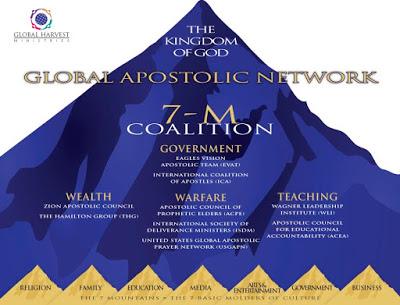 “Back in 2011, when Texas governor Rick Perry was planning his first run for the presidency, he kicked off his campaign with a massive prayer rally in Houston called “The Response.” The event was the source of considerable controversy because Perry organized it in partnership with a whole host of radical Religious Right activists, including several members of the New Apostolic Reformation, a collection of self-proclaimed modern day apostles and prophets who believe that, through the power of the Holy Spirit, they are capable of performing greater miracles than even Jesus himself.

“One of the key leaders in the NAR movement is Mike Bickle, who also played a central role in organizing Perry’s prayer rally. Bickle is the founder of the International House of Prayer, a controversial missionary organization in Kansas City, Missouri, that some critics have labeled a cult and which is best known for engaging in nonstop 24-hour-a-day prayer in preparation for the End Times….” [1]

Once again, during this campaign season in America, the doctrines of Dominionism held by diverse segments of the evangelical world have taken front and center stage. The leaven of the 7 mountain teaching continues to percolate throughout the entire political process.

Six years ago Dr. Orrel Steinkamp and the Discernment Research Group wrote a series of articles about the rapid assimilation of Dominionist teachers/preachers into the American political process. We warned that certain formerly obscure groups – Mike Bickle’s International House of Prayer (IHOP) and C. Peter Wagner’s New Apostolic Reformation (NAR) with their Latter Rain cult roots – were mainstreaming their theology into the political process via large-scale media events, an orchestrated youth movement, and even entering the machinations of political campaigns. All of this was being fueled by prominent voices in the Christian Right promoting the 7 mountain strategy of building the kingdom of God on earth, starting with turning America into a “Christian” nation.

Herescope has published many articles about the 7 mountain theology. Our critical perspective is distinctly biblical, and thus distinguishable from the criticism of the seven mountains coming from the political Left, although we do share some of their concerns about this radical agenda for the church to transform society and/or government(s) into a church-state via cultural, political and/or “warfare” activism. In our articles, compiled below, we clearly articulate our theological differences with this 7 mountains teaching.

7 Mountains Hit the Campaign Trail
Here is a very brief overview of the current situation. There is a YouTube video of the 7 mountain beliefs and “transfer of wealth” teachings of “apostle” Rafael Cruz, father of Republican Sen. Ted Cruz who is running for president. In Bruce Wilson’s Oct. 17, 2013 article titled “Ted Cruz’s Father Suggested His Son Is ‘Anointed’ to Bring About ‘End Time Transfer of Wealth'[2] one can watch “apostle” Rafael Cruz lists a few of the 7 mountains and talk about a generation of “kings” and “priests”: “There are some of you, as a matter of fact I will dare to say the majority of you, that your anointing is not an anointing as priest. It’s an anointing as king. And God has given you an anointing to go to the battlefield. And what’s the battlefield? The battlefield is the marketplace. To go to the marketplace and occupy the land. To go to the marketplace and take dominion. If you remember the last time I was in this pulpit, I talked to you about Genesis chapter 1, verse 28, where God says unto Adam and Eve, ‘Go forth, multiply, TAKE DOMINION over all creation.’ And if you recall, we talked about the fact that that dominion is not just in the church. That dominion is over every area – society, education, government, economics….” [bold added] In his book, A Time for Action, published and sold by WND, Rafael Cruz writes concerning the 7 mountains that “the Bible tells us that we are the salt of the earth and light of the world… Doesn’t that suggest that our influence should touch every area of society – our families, the media, sports, arts and entertainment, education, business, and government?”[3]

Sen. Cruz has been endorsed by Mike Bickle of IHOP.[4] Bickle’s endorsement caused a ruckus due to some of his more aberrant doctrines.[5] Mormon Glenn Beck and controversial historian David Barton, who had both joined 7 mountains architect Lance Wallnau on a Next Great Awakening Tour of America in 2010,[6] also teamed up with Sen. Cruz.[7] And then Sen. Cruz, in a bid to get South Carolina votes, visited Rick Joyner’s church with Glenn Beck.[8] Joyner has a long history of teaching a radical militaristic form of Dominionism. Recently he has been teaching on the topic of “kings and priests” just like Rafael Cruz, but Joyner is more explicit about the merger of church and state:

In connection to the love of God that redeemed us, He made us “kings and priests.” This speaks of His people being called to civil as well as spiritual authority…. in His body on earth are likewise called to both spiritual and administrative authority. In Christ there is no separation of church and state….[9]

Jumping into the political mix, Word Faith prosperity preacher  Kenneth Copeland declared that Ted Cruz was “anointed” to be the next president.[10] Note that Copeland’s prosperity gospel message is what energizes the “great outpouring of wealth” teaching promised by the 7 mountaineers.

Meanwhile other 7 mountain teachers were endorsing Trump just in case God changes His mind and doesn’t anoint Sen. Cruz. Former Alaska governor and 2008 vice presidential candidate Sarah Palin, who has her own controversial history with the Dominionists of the NAR,[11] wrote a gushing letter to the NAR’s chief media organ, The Elijah List, a month before she endorsed Donald Trump.[12] And Lance Wallnau, a leading architect of the 7 mountains of Dominionism theology, claims that Donald Trump has a “Cyrus anointing” on him in an apparent reference to the seven mountains “kings and priests” theology.[13]

Meanwhile other 7 mountain teachers were endorsing Trump just in case God changes His mind and doesn’t anoint Sen. Cruz. Former Alaska governor and 2008 vice presidential candidate Sarah Palin, who has her own controversial history with the Dominionists of the NAR,[11] wrote a gushing letter to the NAR’s chief media organ, The Elijah List, a month before she endorsed Donald Trump.[12] And Lance Wallnau, a leading architect of the 7 mountains of Dominionism theology, claims that Donald Trump has a “Cyrus anointing” on him in an apparent reference to the seven mountains “kings and priests” theology.[13]

This is just a brief summary what is going on. Readers desiring more evidence can google these terms and find numerous examples and articles, even YouTube videos, posted on the Internet about these current events.

Because we have received many questions about the seven mountain theology erupting this campaign season, below is a compilation of articles we have written previously on the topic of Dominionism.  Continue reading

My parents didn’t let me choose my gender
Extrabiblical Movements

4 Responses to 7 Mountain Politics and Theology