This piece over at Pulpit & Pen includes a video showing Arch Heretic Kenneth Copeland laying hands on GOP candidate Ted Cruz’s father.  Many supporters of Sen. Ted Cruz are unaware that dear ol’ dad is ensconced in the unbiblical New Apostolic Reformation movement (NAR). Copeland says he believes with all his heart that Ted Cruz “is called and anointed to be next President of the United States.” Really? Five years ago former Texas governor Rick Perry was approached by NAR “prophets” who convinced him that God had told them that he was the “anointed president” and that the state of Texas would lead the U.S. to an economic and spiritual recovery.  Obviously the voice that spoke to these self-professed prophets wasn’t God. We know this because Rick Perry flubbed up so badly during one of the debates that he had to drop out of the race.  Perhaps Gov. Perry felt he should be the one to cast the first stone at those who prophesied falsely…?  We may never know.

So, now to Seth Dunn’s report: 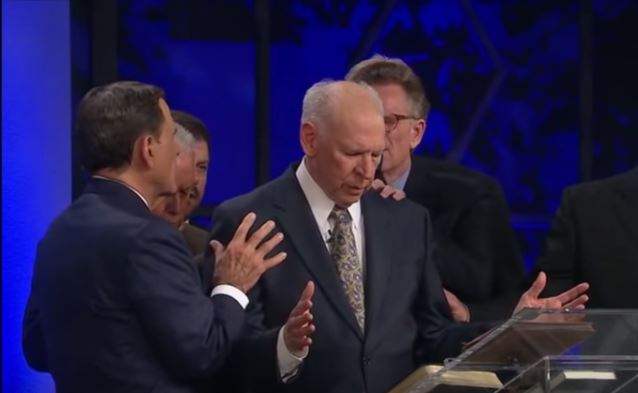 The people who go to Kenneth and Gloria Copeland’s “church” vote. They are American citizens who are entitled to governmental representation just as much as anyone else. Thus, it’s not surprising that the Ted Cruz campaign and its emissaries would court them for their vote.

After more than a decade of observation, I’ve learned that there’s not much American evangelicals like more than religio-political schemes that promise a return to good ol’ family values by the quick and easy one-off event of an election that will turn the country around. It’s a lot like a Word of Faith positive confession, really – get the right guy in the Presidency and most of our problems will get solved just like that. No muss, no fuss, no need for every-Christian involvement in societal rebuke, no felt obligation to repent individually for one’s own apathy and lack of action building the Kingdom of God. No need to suffer, sacrifice, or cast aside compromise and the fear of man and get out there and preach the Gospel boldly. It’s perfect. It’s hero worship rather than worship and service of God.

Which brings us to sparing a thought for the people who attend services at Kenneth Copeland’s “church”, how they are under the influence of wicked false teachers and engaging in false worship of God. Kenneth and Gloria Copeland are arch-heretics who proclaim numerous scripture-twisting false teachings.  These teachings include the following: Word-Faith Theology, Faith-Healing, Positive Confession, the Prosperity Gospel, and the “Little gods” Doctrine of Man.  To make matters worse, Kenneth Copeland claims that God gave him his own jet so that he could pray in private.  In reality, Kenneth Copeland duped thousands of misguided people into funding his “ministry” so that he could afford his own private jet.  Thus, no Christian, is justified in any kind of partnership or fellowship with Kenneth and Gloria Copeland for any reason.  Recently, self-proclaimed minister Rafael Cruz appeared at a Kenneth Copeland’s “Ministers Conference” to proclaim to the audience that “the cloud of the Holy Spirit descended upon (the) room” when his son Ted announced his decision to run for President of the United States.  He made this announcement standing next to a man who blasphemes God for a living.

The elder Cruz is careful to regale us all with the heroic tale of “seeking the Lord” and His direction for six months before announcing a run for President. Two hours in prayer at Ted Cruz’s pastor’s office followed, and we are told that “the final word” came from Heidi Cruz, Ted’s wife. This word from the Lord was: “Seek My face, not My hand,” and then of course a cloud of the Holy Spirit descended on the office.

Naturally, Ted Cruz responded with “Here am I, Lord. Send me.”

Finally, we see in the video a group of suits laying hands on Rafael Cruz to pray for the Cruz family. Can you imagine the anointing released? Just. . . just so much anointing. Anointing everywhere. One wonders how everyone in the congregation didn’t collapse into an immediate and hours-long Spirit-slain stupor.  Continue reading — watch the video

Preach the Word!
The Scandal of Biblical Illiteracy: It’s Our Problem