Rick Becker tackles the claim that the Carr Fire raging in Shasta County that has engulfed more than 100,000 acres is a sign of God’s judgment on Bethel Church in Redding CA.  Is that true? You can read Becker’s piece over at Famine In The Land. He writes: 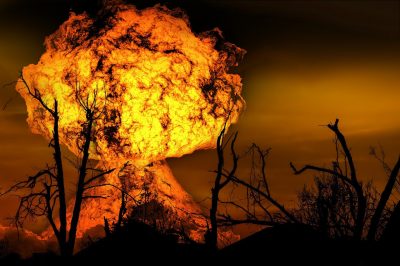 The Carr fire that has caused devastation in California, has weaved it’s way into Redding, home of Bethel church.  Hundreds of homes have been destroyed, and at the time of this writing two lives have been lost.  This tragedy comes shortly after the horrific fires in Greece that took the lives of at least sixty people.  Across the world, other tragedies are taking place in the form of other natural disasters, wars, disease, and starvation.  The Carr fire has captured the attention of those familiar with the New Apostolic Reformation (NAR) due to one of the chief proponents of NAR false doctrines being Bethel church.  In this brief post, I would like to address the speculation concerning the reason for the fire.

Naturally, many who have been a victim of the aberrant teachings and practices of Bethel church are wondering whether the fire is God’s judgement on Bethel church.  For the answer, we need to look to scripture.  The cause for calamity being assigned to sin is nothing new.  Job was the unfortunate victim of such false counsel, and in the end his counsellors were proven wrong.  The misconception that we should escape tragedy due to our level of righteousness (or correct doctrine) is one that ignores scripture, and reality itself.  In fact God  “makes his sun rise on the evil and on the good, and sends rain on the just and on the unjust” Matthew 5:45

To assume that a tragedy is in direct proportion to our sin is to fall back under the law!  If God were to punish (by wildfire) cities, states and countries that had sinned, or that had churches in them that taught false doctrine the whole earth would be on fire.  In attributing sin as the cause of suffering, we are in fact coming to the same rash, and faulty conclusion NAR teachers espouse – we are sick due to lack of faith, we are poor due to not tithing, we are suffering due to lack of spiritual warfare or failure to decree, declare and shift atmospheres etc.

It seems as if those who were speaking to Jesus, were attempting to get a reason as to why these tragedies occurred.  This is the same question many are asking regarding the Carr fire.  Jesus does not entertain their suspicions, but instead asked them to examine their own hearts.  He dispels the notion that these tragedies are proportional to any level of wickedness on the individuals part. Jesus makes three things patently clear:

Suffering is no indication of how sinful we are.
Speculation as to the reasons for tragedies is a mistake on our part.
Similar tragedies could befall anyone.

A wildfire and it’s aftermath are not going to persuade those who have bought into the lies of Bethel, that their doctrine is false.  If Bethel’s buildings were reduced to ashes, they have the dollars to rent another, and their new $96 million campus has already been approved.  Scripture warns that imposters like Johnson and Vallotton will grow in their delusion: “while evil people and impostors will go on from bad to worse, deceiving and being deceived” 2 Timothy 3:13.  They have rejected truth, and been given over to a delusion. Only God can open the eyes of those caught up in deception, and our task is to contend for the faith, and pray for those who have been blinded by an angel of light.

Mark my words, Bethel will have many “testimonies” in due course.  Comments on social media from Bethel fans, reveal that their state of delusion has not diminished, as they still believe they can decree, declare and take authority over the fires. Here are a few examples:  Continue reading