According to Scripture, if someone commits adultery and other grave sins, he or she is permanently disqualified as a spiritual overseer — a person who functions in leadership. Evidently TD Jakes hasn’t read 1 Tim 3:1-5 that clearly states the qualifications of a church leader:

The saying is trustworthy: If anyone aspires to the office of overseer, he desires a noble task. Therefore an overseer must be above reproach, the husband of one wife, sober-minded, self-controlled, respectable, hospitable, able to teach, not a drunkard, not violent but gentle, not quarrelsome, not a lover of money. He must manage his own household well, with all dignity keeping his children submissive, for if someone does not know how to manage his own household, how will he care for God’s church?

Despite what the scriptures teach, Bishop Jakes announced that he feels that disgraced pastor Chris Hill is ready for ministry after just 3 months of “professional counseling.” It is astonishing that Jakes would completely disregarded the Apostle Paul’s instruction that anyone who does not have his household in order (Blair doesn’t) and who has shown a lack of self-control (adultery) is not to be serving in church leadership, especially if it’s in a position that’s connected to the ministry of the gospel.

Pastor Todd Pruitt, co-host of Mortification of Spin, says “there are certain virtues that must characterize the lives of overseers (1 Tim 3; Titus 1) precisely because there are certain moral demands placed upon those who exercise oversight in the household of God.” When a pastor commits adultery his sin opens the door for the mockery of the gospel says Pruitt. “The adulterous pastor does untold damage to the public witness of the church and invoking God’s sovereignty and grace cannot soften or in any way excuse that fact.” (source) Leonardo Blair fails to mention the biblical role of the overseer in his piece over at Christian Post, a site Berean Research does not endorse. Following is his report: 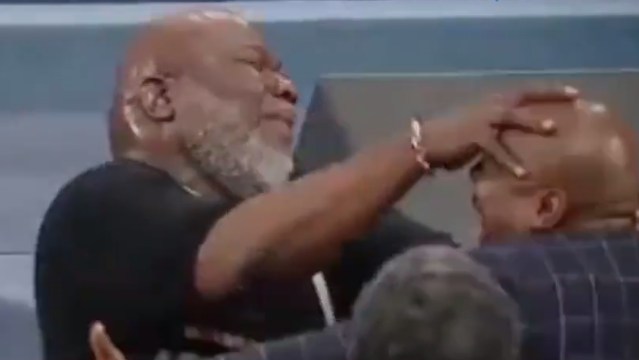 Three months after resigning as senior pastor of The Potter’s House Church of Denver over an alleged affair with a married parishioner, Pastor Chris Hill says he is ready to come back following counseling and a public show of repentance Sunday. His mentor, Bishop T. D. Jakes of Potter’s House of Dallas, laid hands on him and declared restoration.

“God said that if we confess our sins, that He is faithful and just to cleanse us from … all unrighteousness. I just believe that this is what the grace of God is for,” Jakes said as he laid his hand on Hill’s shaved head in a video clip from T.D. Jakes Ministries Sunday.

Earlier this year, Pastor Hill’s wife of more than 20 years, Joy, alleged in a mass text message to church members that she was able to verify that her husband carried on an affair with their young goddaughter, Shirnae McFarlane, who married Arthur McFarlane III on September 26, 2014.

“FYI Pastor called the police on me tonight because I yelled at him asking him to leave the house tonight and he wouldn’t. I was upset because he won’t stop having an affair with Shirnae, and I can’t live like this anymore. They’ve been having an affair for SEVERAL months, and he finally admitted it yesterday (after I hired a private investigator to have them followed over the past 6 weeks),” Joy Hill reportedly said in the text message first cited by the Obnoxious Television blog.

In announcing Hill’s resignation in April, The Potter’s House Church of Denver also said he and his wife would be seeking a formal separation. It is unclear if the couple has been reconciled but in his prayer for Hill, Jakes indicated that they are still married.

“If there is anybody in here that has ever had God forgive you of something you need to back me up on this,” Jakes told his church Sunday as he continued praying for Hill. Continue reading