Priscilla Shirer is an actor, author, speaker, and Bible teacher.  As such she has influenced many professing Christians, mostly women. Following her appearance in the hit film War Room, much has been written about her.  Some bloggers expressed their concerns about her teaching, and rightly so as some of what she teaches is unbiblical. John Lanagan was one of those who warned the brethren of Shirer’s decent into Christian mysticism in a booklet published by Lighthouse Trails.  Even before War Room hit theaters, Bible teacher Erin Benziger expressed her concern in a piece entitled: “True Woman Conference Speaker Priscilla Shirer Hears God’s Still, Small Voice.” Benziger writes:

Those who believe that God is continuing to offer new revelation today deny the sufficiency of Scripture. Priscilla Shirer does just this in the following quote:

But, as author Dallas Willard said, “Far be it from me to deny that spectacular experiences occur or that they are, sometimes at least, given by God.” I believe as he, however, that “the still small voice–or the interior or inner voice, as it is also called–is the preferred and most valuable form of individualized communication for God’s purposes. (Shirer, 16, emphasis added).

Shirer here not only has undermined the authority and sufficiency of Scripture, but she has begun to tread on dangerous, mystical ground. Throughout her booklet, Is That You, God?, Shirer seems to indicate that the Christian need not fear hearing from anyone or anything other than the Almighty. Yet, how is she to know if she is conversing with God, with herself, or with another spiritual entity? Even those who promote and teach these aberrant ideas of spiritual formation, contemplative prayer and meditation warn about the possibility of hearing from something or someone other than God. (Source)

Links are provided at the end for those who wish to learn more about Shirer’s teaching.

Author Amiee Byrd, who is a contributor on one of my favorite podcasts, Mortification of Spin, has written an excellent review of Fervent.  Aimee’s review is a must read. 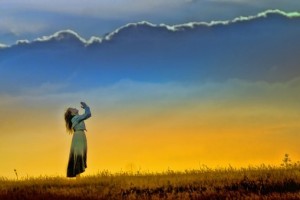 Prayer is the portal that brings the power of heaven down to earth. It is kryptonite to the enemy and to all his ploys against you. ~ Priscilla Shirer

I am picking up a theme in the titles of the bestsellers for Christian women. Beth Moore challenges us to an Audacious love for Jesus, and the one-word title of Priscilla Shirer’s book tells us what kind of prayer-life we need: Fervent. The success of these books says something about what women must be seeking, something more special and beyond the ordinary, something passionate and motivating. And who wouldn’t want a fervent prayer life?

Fervent is the #1 bestselling book for Christian women, having an average 5-star rating with 525 reviews on Amazon. This book is inspired by a popular movie in the Christian subculture called The War Room. Shirer starred in the movie (with Beth Moore). The subtitle of this book and purpose in writing is: A Woman’s Battle Plan for Serious, Specific, and Strategic Prayer. In her introduction, she explains:
Because this is war. The fight of your life. A very real enemy has been strategizing and scheming against you, assaulting you, coming after your emotions, your mind, your man, your child, your future. In fact, he’s doing it right this second. Right where you’re sitting. Right where you are. (2)
And she wants us to know that “praying with precision is key” (3). Fervent tackles ten areas where “the enemy is at work,” strategizing against us.
Shirer is in tune with the areas where women struggle. Each chapter cleverly begins with a strategy like, “If I were your enemy, I’d seek to dim your passion” (25), or “I’d devalue your strength and magnify your insecurities until they dominate how you see yourself” (55). I found myself flitting back and forth between agreement and “yeah buts” in this book. Shirer is so good at honing in on the gritty challenges women fight, she wants us to be more aware of spiritual warfare, and each chapter ends with a couple of pages of scripture related to it’s topic that we should use in prayer.
How She Describes Prayer
And yet there are some major things missing for a book that is about fervent prayer. When I read a book about prayer, I expect to learn about prayer and, well, the One we pray to. But I felt like this book is more about women’s struggles and Satan’s strategies. And while I don’t disagree that Satan has personal and tricky strategies, I felt like he gets the bulk of the blame for our lack of spiritual growth. Sin seems consequential to Satan’s ploys in this book. We need to hear that sin is a serious personal offense against God. We aren’t merely strategizing in prayer so that we have good marriages, a fabulous self-image, and peace in our lives.
Even when she speaks about repentance, Shirer doesn’t mention confessing our sin and asking for forgiveness. She does tell us to “see the foolishness of anything that perpetuates old sin patterns, and by His Spirit walk away,” and then, “Ask for freedom, for release, for the ability to deflect lies and embrace truth” (101). This all has the tone of self-empowerment by “claiming your calling” (105), rather than humbly submitting to a holy God whom we have offended. The word sin doesn’t even appear in her definition of repentance, which is the “R” in her acronym P.R.A.Y.
Let me just contrast what Shirer says about prayer with a recent book I’ve read that had a chapter on prayer, Daniel Block’s For the Glory of God.
Shirer: “Prayer is the portal that brings the power of heaven down to earth. It is kryptonite to the enemy and to all his ploys against you. (5)
Block: “Prayer is not about informing God of our needs as if he is ignorant; instead, it is ‘a vehicle of humility, an expression of un-self-sufficiency, which in biblical thought, is the proper stance of humans before God.’” (212, quoting from Moshe Greenberg)  Continue reading
Related
Beth Moore and Priscilla Shirer — Their History of Contemplative Prayer and War Room Should Not Have Used Them by John Lanagan and the Editors of Lighthouse Trails
True Women Conference Speaker Priscilla Shirer Hears God’s Still Small Voice By Erin Benziger
War Room’s Priscilla Shirer’s Contemplative History and Why It Matters by John Lanagan
Read our White Paper on Contemplative Prayer and Spiritual Formation

Christ Hidden in Our Schools, While Muhammad Roams the Halls Freely
End-Time Scenarios of the New Alchemists