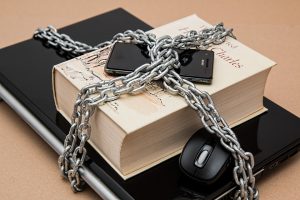 “Brain stoppers” is a term I came up with to refer to a variety of tactics used by leaders in the New Apostolic Reformation (NAR) to discourage their followers from thinking critically about NAR teachings. I’ve written a series of posts about different brain stoppers, starting with “Brain Stopper No. 1: Name Calling.”

Another brain stopper, I call the “Book Ban,” is employed by Bill Johnson–senior pastor and NAR apostle over Bethel Church in Redding, California. Johnson tells his readers not to read books that are critical of teachings he promotes. He does this in his popular book When Heaven Invades Earth: A Practical Guide to a Life of Miracles. Here are his words.

Be childlike and read the works of those who have succeeded in the healing ministry. Stay away from the books and tapes of those who say it shouldn’t or can’t be done. If the author doesn’t walk in power, don’t listen, no matter how proficient they may be in another field. … Someone once brought a book to my office that was critical of the revival that started in Toronto in January of 1994. I refused to read it and threw it away. … For me to consider the criticisms of this revival would be the same as giving audience to someone trying to prove I should have married another woman. First of all, I love my wife and have no interest in anyone else. Second, I refuse to entertain the thoughts of any person who desires to undermine my love for her. Only those who will add to my commitment to her are allowed such an audience with me. Anything  less would be foolishness on my part. The critics of this revival are unknowingly attempting to separate me from my first love. I will not give them place. (Chapter 10)

Married to a revival?

His words about his wife and “first love” sound nice–even noble. What’s the problem with his analogy? It falls apart in at least three ways.

First, Johnson implies that he’s so committed to the Toronto revival it’s as if he “married” it. He’s making a logical error called a “category mistake.” A commitment to a person and a commitment to a set of beliefs about revival are completely different things. When you marry, it’s for life. But you should be willing to separate from certain beliefs if they’re shown to be in error. To do so takes humility and wisdom.

Second, he’s “begging the question.” By saying he won’t listen to any criticisms of the Toronto revival, Johnson has already determined that this particular revival was a genuine work of God. Yet that’s the very question the critics are asking. He’s made up his mind before they could even present their case.

Third, notice that he switches from talking about the Toronto revival to talking about his “first love.” Presumably, his “first love” is God. He has engaged in a classic bait and switch. The Toronto revival and God are not the same thing. Many people believe in God, and love Him dearly, while challenging the genuineness of certain revivals or specific teachings about revival.