Posted By Marsha West on May 29, 2015 in Roman Catholicism
Share 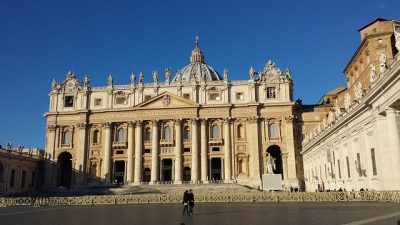 Doing the research and investigative work that the major U.S. media have all but abandoned, an organization called the American Life League (ALL) has uncovered dramatic evidence of links between the highest levels of the Roman Catholic Church and an international communist group known as the World Social Forum. The evidence suggests overt Marxist influence on the climate change movement that Pope Francis and his top advisers are now embracing.

The ALL report, a 76-page PowerPoint presentation complete with original source material and numerous photographs, documents how Caritas Internationalis, the Vatican’s top social justice organization, is actually “providing leadership” to the communist group.

The report’s author, Michael Hichborn, stated, “This is a very serious problem. Given how intimately connected the World Social Forum (WSF) has been with the promotion of communism, abortion, and homosexuality since the very beginning, it’s impossible to see how any Catholic can participate in it, or even speak positively about it, let alone have any involvement in its governance. But Caritas Internationalis does!”

These allegations can’t be dismissed as anti-Catholic bigotry, since the American Life League is itself a Catholic organization that has been working for years to expose Catholic funds and organizations that promote causes at variance with official Catholic teaching.

However, Hichborn tells Accuracy in Media that except for specialized publications such as Lifesitenews, the media have ignored the report.

The ALL report on the WSF includes eye-opening photographs from the group’s events, featuring open displays of communist flags and banners as well as images of such personalities as Lenin, Castro, and Mao.

Most of our media, of course, reported on the “death” of communism after the fall of the Berlin Wall.

But the ALL report notes that “There can be no mistaking the materialist and revolutionary (Communist) nature of the forum itself, which sets it in opposition to the Catholic Church.”  Continue reading