Who are we going to allow to define God, New Ager Wm. Paul Young and promoter of witchcraft J.K Rowling…or the Lord Jesus Christ? Following is Pastor Larry DeBruyn’s response in a piece he penned for Herescope: 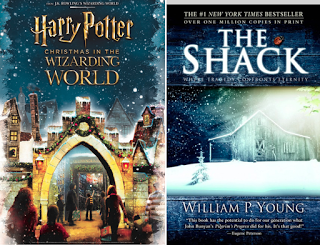 Looks like the concept of “god” in the book and movie The Shack is spreading. Fiction and fantasy have merged. J.K. Rowling, author of the occult Harry Potter series of books, popular reading among even many Christians, has announced that like The Shack, she believes “God is a Black Woman.” (Rowling’s declaration, as well as The Shack‘s fiction, reminds me of The Black Madonna.)  Both Rowling and Wm. Paul Young write from a worldview where almost anything or anyone, even God, can be imagined to be whatever mythmakers want or need her/him/them to be; kind of like Christmas, upon a whim, when we wish upon a star, Christ can become Claus. From Disneyworld to Star Wars, magic creates myths.

But deliverance from a magical worldview where minds whimsically make a fantasy out of any reality—believe to conceive—can only come from reading the Scriptures. Now I can hear the protest, well didn’t Moses and Jesus work magic, do miracles? No because both, as well as other prophets and the apostles, performed miracles of God to expose the fraudulent marvels perpetrated by fake spiritualists. The biblical and revelatory miracles, culminating with Jesus’ resurrection from the dead, testified against those the magicians worked; Moses against Pharaoh’s (Exodus 7:1-9:35), Daniel against Babylon’s (Daniel 2:37-39), Jesus against the Jew’s (Matthew 12:22-29; 9:34; Acts 19:13), Peter against a Sorcerer’s (Acts 8:8-14-24), and Paul against the seven sons of Sceva (Acts 19:11-20). By miraculous workings through Jesus and the other Prophets and Apostles, God introduced miracles from the unseen world above (heaven) to refute and rebuke the miracles being performed by magicians in phenomenal world below (earth). (See John 8:21-24.) Upon Jesus’ healing of the paralytic, the crowd exclaimed, “We have never seen anything like this!” (Mark 2:12). Any presumption that we inhabit a Disneyland-like world raises “real” contradictions with the Christian faith. So the question arises: Who are we going to allow to define God, Jesus or Young and Rowling? Continue reading

SEE OUR WHITE PAPERS ON DISCERNMENT AND OCCULT-SORCERY

How are we to regard Michael Brown, Todd White and other NAR leaders?
The “Bethel Board”-Encounter God With This New Game! (No, it’s NOT a Ouija Board, You Religious Pharisee)