In a piece over at The Watchman’s Bagpipes, Glenn E. Chatfield takes on the producer of a video, an atheist, who hoped to undermine the Creation account in the Bible. 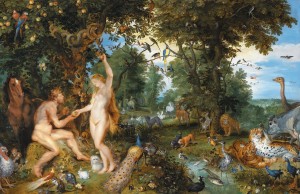 A fellow blogger referred me to this video and asked me if I could refute it on my blog, bearing in mind that it should be understood by children.  It is an atheist’s understanding of how the whole concept of Adam’s sin affected the human race.  However, he starts off immediately with a straw man argument because he teaches a concept which is not the Christian view.  So before we review the video, I want to give a brief explanation of what the Bible says.  (There are some different teachings on the subject, albeit mostly similar, but I will do the best I can to keep it simple.)

Mankind was made in the image of God (Gen. 1:26-27) and was perfect in the Garden of Eden.  God gave Adam every tree in the garden from which to eat, except that he was not to eat from the tree in the middle of the garden—the tree of the knowledge of good and evil (Gen. 2:16-17).  God told him that if he ate of that tree, he would die.  Eve was not yet created when Adam received this command, so she was deceived by Satan as to why the command was given; she ate some of the fruit and gave some to Adam to eat.  Since Adam knew the rule and most likely told it to Eve (who was led to a misunderstanding by Satan), he was held more responsible for the sin, although both were guilty.

Now, I don’t know the Hebrew but, from my understanding from those who do, the understanding was that Adam would immediately die spiritually (a separation of close fellowship with God) and begin to die physically (he was originally created immortal).  When Adam and Eve had children, the sin nature Adam received by dying spiritually would be passed to his children, and on through the human race (Romans 5:12).  Not only that, but with sin entering into the world, the entire creation began to change and become corrupted (Rom. 8:22).

Physical death became a consequence of Adam’s sin, and all humanity would also die because of sin.  But, as with Adam, people would not only physically die, but they would be born with a sinful nature; i.e., spiritually dead (Rom 6:23).

God is just and cannot allow sin to go unpunished.  Throughout the Old Testament we see how God established a sacrificial system by which an animal was killed and its blood used as atonement for the sin—to pay for it (Lev. 17:11, Heb. 9:22).  If the punishment isn’t paid before death, the final punishment is eternal separation from God in Hell; i.e., eternal death.  However, if the person’s sin is forgiven (i.e., paid for), then he will spend eternity with God; i.e., eternal life in Heaven.

Now, understand that no one except Adam had to pay the punishment for his sin; people are responsible only for their own sin (Deut. 24:16, Ezek. 18:20).  I believe that Adam’s and Eve’s sacrifice was the animal/animals which died so God could use their skin for clothing for them (Gen. 3:21), and this is what many scholars teach.

Under the sacrificial system of the Old Testament, the priest would be the intermediary between man and God, and accept the animals from the people for performing the sacrifice.  The problem with this system is that it had to be done over and over to pay for the continuing sin.  However, Jesus became the one high priest intermediary between God and man, and at the same time he also became the sacrifice for sin, once for all time, when he was killed on the cross (Heb.8-10).  The way the individual has his sins paid for is to place his faith in Jesus as the savior; to believe that Jesus is God in the flesh, and that He died for sin and was raised again from the dead (Rom.10:9).  Those who do not accept the sacrifice of Christ—who do not believe He died for their sins—will pay for their own sins by eternal punishment in Hell (John 3:36).

Okay, that’s sort of simplistic but with this information we are prepared to review the video.

From the beginning of the video, the analogy to God’s demand for payment for sin has people being punished for someone else’s sin.  This is NOT what the Bible teaches.  All people have their own sin nature, which leads them inevitably to sin (Rom.3:23), and it is their own sin for which they are punished.

Beginning at time mark 2:46, the narrator says that “Sam” is being punished for the sin of Adam and Eve, which, of course, is not what the Bible teaches.  Contrary to the narrator’s claim, God did not decide to punish every person who ever lived— He would punish only those who refuse to seek forgiveness for their sins.  Justice demands punishment for wrong-doing, which is why when people speed, they pay a fine; if they rob a bank, they spend time in jail.  In the same way, sin has repercussions which must be dealt with, and God decided what the punishment would be; after all, He is the creator and has that right.

The narrator then says God remained angry at Eve (representing Adam and Eve) and that the reason God created mankind was so that they would choose to obey Him all the time.  Yet the real reason God created mankind was for fellowship and for His personal glory.  He expected mankind to obey Him because He is the creator, in the same way parents expect their children to obey them but they don’t have children for the purpose of having the children obey them all the time; they have children to love and have a relationship with.

According to the narrator, Jesus was “sent to Hell for three days where he suffered unimaginable torture.”  This is totally totally silly and nowhere in the Bible.  Jesus was in the grave for three days.  The idea that He went to Hell comes from the Apostles’ Creed, which said that “He descended into hell.”  However, there are two different ideas translated as “hell” in the Bible.  One is the place of eternal punishment while the other is the grave.  This latter is “sheol” in the Hebrew and “hades” in the Greek.  All the Apostle’s Creed is saying is that Jesus descended into the grave; i.e., He was really dead.  The idea that Jesus was tortured in Hell does not come from the Bible, rather it comes from false teachers such as those in the Word of Faith cult, like Joyce Meyers, Benny Hinn, et al.  There is absolutely no scriptural basis for such a belief.

The narrator then claims that through the Bible “God threatens Sam with punishment for what Eve did with the forbidden fruit.  God says that because of what Eve did, Sam and every other person deserves to be punished and tortured for eternity after they die.”  Well, we’ve already seen that this is absolutely not true.  People are punished for their own sin and not what Eve did.

According to the narrator, all Sam has to do is to apologize for his sin and Jesus’ death pays for his sin, yet apologizing for sin is not what the Bible says; it says he has to repent.  An apology just says you’re sorry you did what you did, while repenting means to agree with God that what you did was sin, and then to turn from that sin.  But this isn’t all that is required; Sam must also place his faith in Christ as the Savior; believe that Jesus actually died for his sin.

The fact that God loves mankind is why He provided a way of just punishment for the sin of man; if God did not love His creation, he would not have provided a way to pay for sin.

As the video ends, the narrator begins passing judgment on God by calling Him “jealous, unjust, vindictive, bullying, malicious, and petty thing obsessed with the death penalty…”.   But if there is no God, by what standard is this man making such charges?  How can he claim that God is such a horrible God when he has no moral standard to judge God against?

The video begins on lies and misrepresentations of the Christian beliefs, and it ends with narrator making himself out to be God.

The Trinity
In the aftermath: Muslims in Niger Burn 69 Christian Churches, Kill 10 Christians and Injure Hundreds