Learning the Path blogger, Brandon, reports on past and present speakers at Liberty University, some of whom are outright false teachers, and he tells us why they’re accused of playing fast and loose with the truth. One example he gives is Ann Voskamp who’s scheduled to speak on February 10th.  Brandon points out that this popular author and speaker “is yet another mystic who has made disgustingly blasphemous statements about God. Read this from her book, “One Thousand Gifts”, she wrote, “I fly to Paris and discover how to make love to God.”

Even though Trump has already spoken at LU, we’re posting Brandon’s piece because we want Bereans to be aware of the troubling speaker lineup.  He writes:

University students have been in arms about Donald Trump speaking at their school. Not only that, but Marc Corbett wrote an article at the Gospel Coalition that also was against the notion of Trump being allowed to speak. Before I get any further, I want to make it clear that I am no fan of Trump. I am pulling for Ted Cruz in the 2016 election. I have my reasons for not liking Trump, but I will save those for another day.

The recent lineup has included him, but by the looks of the lineup, Trump is the least of their worries. In the past, they have also had many people speak that should not have been given a stage to speak on. Notably, while they are upset that a man who is known to be unnecessarily rude (Trump) is coming, the Pro-Abortion, Pro-Gay Bernie Sanders was also invited to speak and people actually defended this choice. I get why people don’t want Trump at their school. I wouldn’t either. But At the same time, I wouldn’t want a man who supports sexual perversion and in-utero infanticide to come near my school. No statement about his politics made, Ben Carson, who also spoke at LU, is a Seventh Day Adventist. If you are in outrage because Non-Christian Donald Trump spoke, you should also be outraged that cultist Ben Carson did. Not only did they invite an Abortion Advocate and Seventh Day Adventist, but they invited Roman Catholic Rick Santorum to come and speak. Even politics aside, the lineup of Liberty University gets worse than Donald Trump. 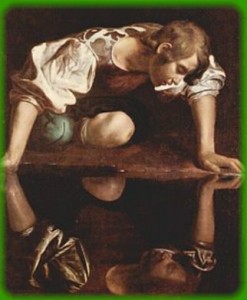 Narcigesis: “The reading of one’s own life experiences and/or that of another’s life experience, into the text of Scripture; the need to make the Bible all about themselves.” Photo courtesy Apprising Ministries

Not only has Sanders spoken at LU, but so has the mystic author of “The Circle Maker”, Mark Batterson (Source). Mark Batterson is most known for his promotion of the Jewish Mystic Honi and Mystic Circle making. Another speaker who has been there is Steven Furtick (Source). Furtick is “The King of Narcigesis”, known for almost always taking a text that has nothing to do with himself, taking it out of context, and making it about himself (This Process is known as Narcigesis). Word of Faith, prosperity gospel pastor Brian Houston has also spoken at LU (Source). He is most song for basically being the leader of the Hillsong cult. He wrote a book centering around the prosperity gospel entitled “You Need More Money” (Source) and was connected to a scandal (Source, WARNING: It is infuriating). Houston isn’t the only Hillsong cultist to speak at LU. They’ve also had Carl Lentz (Source), who has proven himself to be more than soft on the issue of homosexuality (You can read more here), almost to the point of being a Vinist (Vinism is the heretical belief that homosexuality is not sinful). They have also had Mystic and Protege of Joyce Meyer, Christine Caine (Source). Let us not forget the time that Glenn Beck was also invited, despite the fact that he is a Mormon. There are many more people who’ve spoken at LU that any discerning mind should be concerned about.

The sad thing is, that hasn’t changed. There are still those that are on the future lineup (Which can be read here)  Continue reading

Discernment: What’s Love Got to Do with It?
Discernment as Free Speech

One Response to Dear Liberty U Students and The Gospel Coalition: You Have Bigger Problems Than Trump