Gaylene Goodroad of Herescope has written a book review of  David James’ new book “Biblical Guide to Shemitah and the Blood Moons: Discerning Popular “Prophecies” in the Light of God’s Word.”  In the book Dave James lays to rest the notion that Jonathan Cahn (The Harbinger; Shemitah) and John Hagee (Blood Moons) are modern day prophets, as some people believe.  In fact, both these men are false prophets. 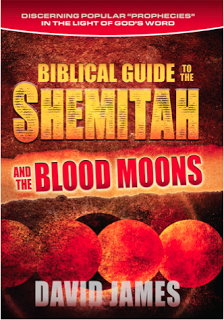 The book, The Mystery of The Shemitah, by Jonathan Cahn—a runaway sequel to his bestselling book, The Harbinger—has nearly rivaled the success of its predecessor[1]—and has proponents of these ancient mysteries eagerly anticipating the economic destruction of the United States this September (when the “Shemitah” cycles end), in fulfillment of the apocalyptic and calamitous judgments, predicted in the so-called hidden end-time Jewish prophecies, Sabbaths (Shemitahs, pronounced sh’mee’-tah), and current Blood Moon Tetrad (aligned with Jewish feast days), detailed in Cahn’s books.

There is extraordinary publicity ramping up over the dire events that are predicted to happen the last few weeks in September this year, 2015.Charisma, for example, just ran an article titled “10 Things That Are Going to Happen Within 15 Days of the End of the Shemitah,” which attempts to prophetically connect the Jade Helm military exercises, selected United Nations conferences, and even the Pope’s upcoming visit to America events to the Blood Moons prophecies that have been popularized by men such as Jonathan Cahn, Mark Biltz and John Hagee.

However, not everyone agrees with these dreadful predictions. Dave James, who previously authored  The Harbinger: Fact or Fiction? (a critical review of Cahn’s The Harbinger) initially reviewed Cahn’s book The Mystery of the Shemitah in an article he posted last September on his blog, the Alliance for Biblical Integrity (ABI).[3] He has continued his careful, methodical, and in-depth debunking of this phenomenon, which was recently published into his 206-page critical book review: Biblical Guide to the Shemitah and the Blood Moons (hereafter referred to as BGS). James explains his reasons for doing so:  Continue reading

When a False Teacher Calls America “Israel” by Bob DeWaay

Book Review: The Mystery of Shemitah

Down the Decadent “Ashley Madison” Avenue
Seances, Spirits and 12 Steps