From this piece we learn that there are two-tiers of Christian hierarchy.  According to Elizabeth Prata of The End Time, “At the top are the super-spiritual, super-intimate believers who are blessed with God’s favor in receiving this special revelation directly. The bottom tier are the unlucky/unfaithful/less-than believers who don’t ever receive such personal ministrations from Jesus.”

Find out if you’re blessed with God’s favor, like Beth Moore is, or if you’re super-unlucky… 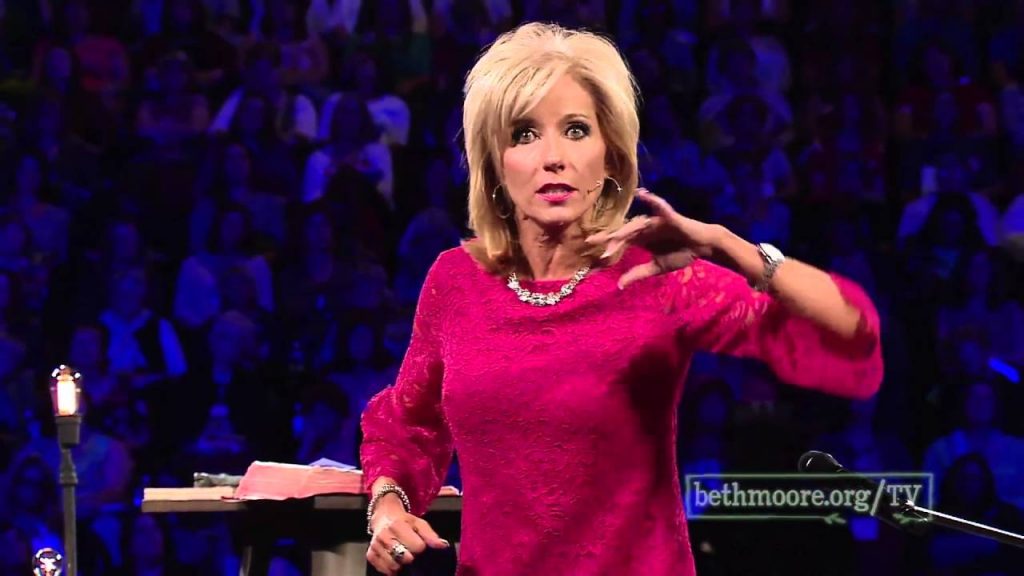 My first introduction to Beth Moore was in 2011 at a Southern Baptist Church in Georgia I was a member of at the time. The women regularly read her books, talked about her, and watched her show on LifeToday, where it was broadcast then. Now it is broadcast on TBN, tucked in a scheduling line-up among many well known heretics and false teachers.

I was invited to go along on a Ladies Retreat weekend. We would launch our study from having watched a Beth Moore DVD segment. The Ladies Ministry leader (pastor’s wife) would then facilitate a discussion. The centerpiece on day 1 of the video teaching was Beth Moore telling a story about being in an airport and sitting next to a old man in a wheelchair with extremely matted hair. It’s known as the Hairbrush Story.

There are a number of items one can focus upon when deconstructing her story. I and others have noted Moore’s propensity for teaching from a word she had been given from the Lord, a direct revelation. This is problematic to say the least. I’d like to call your attention to an excellent 90-second video from the WWUTT (When We Understand The Text) folks who succinctly explain, from the text, why receiving direct revelation is unbiblical. Here it is, and please, take a listen. As I said, it is only 90 seconds.

Visions and Voices From God? (A Still Small Voice?)

Another angle on which one can focus regarding this popular Beth Moore story is the fact that some teachers who claim to receive direct instruction set up a two-tier Christian hierarchy. At the top are the super-spiritual, super-intimate believers who are blessed with God’s favor in receiving this special revelation directly. The bottom tier are the unlucky/unfaithful/less-than believers who don’t ever receive such personal ministrations from Jesus. Indeed, one blessed older lady said at the conclusion of Moore’s hairbrush story, “I wish I had a relationship with Jesus like she has.”

The Gnostics were a group of false teachers who were active in Apostle John’s day (as they are now). Their teaching focused on receiving direct knowledge and naturally led to a hierarchical structure, which implicitly demean and discourage the less-thans. Gnosticism was not directly mentioned in the Bible though it seems to have been alluded to in 1 Timothy 6:20. Its influence in late first and second century believing life was a potently anti-Christian (as it is now).

Erin Benziger has written an essay covering this aspect of the fallout from direct revelation. Why Beth Moore and Not Me? The Danger of Claiming to Receive Direct Revelation.

A third way to look at this popular story of course is to compare it directly to scripture. It’s hard to know exactly where to start because Moore doesn’t teach scripture. She teaches feelings, events, and stories. Joel Osteen waves his Bible at the beginning of every broadcast. The crawl along the bottom of the TV flashes scripture addresses, but Osteen never really says what the scripture is about. Thus he and Moore and others look like they are teaching the Bible, but they really aren’t.

The Bible tells us this is a common approach from false teachers. No, the Bible doesn’t say “they shall wave their Bibles around” like Osteen does, or “They shall mention the Word frequently but not teach it’ like Moore does, but here is what the Bible says about the subtlety of false teachers —   Continue reading

All Beth Moore critiques here in one place by Elizabeth Prata