Disney has been pushing the envelope for years so this news should come as no surprise. What professing Christians must come to terms with is that the entertainment industry has an agenda to normalize sexual perversion — the 60’s notion that “if it feels good do it.” Those who study God’s Word in context know that homosexual acts are not “normal and natural.” No. The clear teaching of Scripture (Romans 1:26-27) is that homosexuality is a sexual perversion; therefore it is a sin against a holy God. So God’s people have a choice to make. Either follow Jesus or follow the Hellywood crowd.

That said, knowing the biblical truth about homosexuality is of the utmost importance because those who call themselves Progressive Christians deny that God condemns homosexual behavior. Those of us who believe the Bible on this issue must speak the truth with compassion.

Now to BBC’s story. Read it and weep: 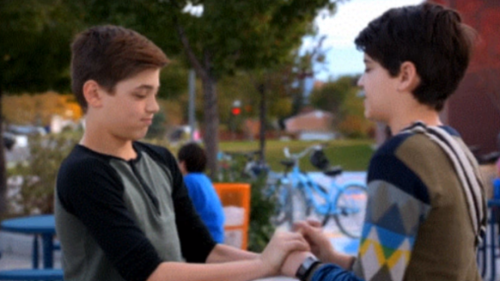 The entertainment industry is going all out to sexualize children, and that includes Disney. Andi Mack’s average viewer is 10 years old.

The Disney Channel is introducing a gay storyline for the first time in its show Andi Mack.

The channel is to set to make history when its season two premiere airs on Friday in the US.

It will see best friends Andi (Peyton Elizabeth Lee) and Cyrus (Joshua Rush) both admit they are attracted to the same boy.

A Disney spokesperson says the show “sends a powerful message about inclusion and respect for humanity”.

The statement added that the show’s creator, Terri Minsky – who also made the hit Disney show Lizzie McGuire – and her team took “great care in ensuring that it’s appropriate for all audiences.”

The series is a coming-of-age show that revolves around 13-year-old girl Andi and her friends Cyrus, Buffy and Jonah.

In the season premiere, Andi is dealing with feelings for a boy she knows when her best friend Cyrus realises that he has feelings for the same boy.

Cyrus’s story develops in later episodes as he begins to understand himself better with the help of his friends and family.

Rush said he was proud to bring the “groundbreaking storyline” to life.  Continue reading

Hollywood’s Plunge Into the Bottomless Pit by Marsha West