This is a question for unbelievers, of course.  Christians know that there is no such thing as a ghost. In fact “No evidence has produced a single fact that should sway a Christian into believing that the spirits of deceased people can loiter on earth,” wrote Rick Barry in 2010 for Answers in Genesis Magazine.

According to Christian apologist Ron Rhodes who penned The Truth Behind Ghosts, Mediums, and Psychic Phenomena:

A common misconception is that disembodied spirits can remain on earth or perhaps come back to “haunt” or otherwise interact with us. However, nothing in the Bible supports this belief. Rather, “man is destined to die once, and after that to face judgment” (Hebrews 9:27)

Dabbling in spirit contact is strictly forbidden in the Bible.  We must come to grips with the fact that demons can masquerade as the dead and can mimic the voices of our loved ones.  Moreover, demons can give information that only the dead person would have known.  For this reason believers must never attempt to contact the spirit world.

So – now to the article Rick Barry wrote for AIG: 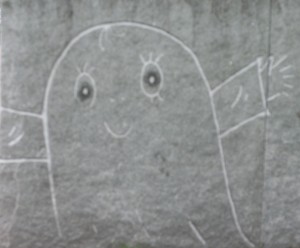 Ghosts. What do you really think about them? If someone pushes us, most will admit a degree of love for scary stories. But what about reports of real ghosts, even by sincere Christians? Few Christians seem to know what to think. If we look to the Scriptures, however, we find solid answers, even on this murky subject.

Both children and adults alike wonder about the existence of ghosts. Some reject the notion. Others insist that ghosts exist and cite experiences—their own or friend-of-a-friend stories—as proof.

But what is a ghost? Although definitions vary, the most common one is that ghosts are the disembodied spirits of dead people that linger on earth. According to tradition, ghosts are invisible but can permit humans to see them.

Of course, either a thing exists or it doesn’t. No amount of belief will cause ghosts to exist if they don’t; nor could personal opinion cause ghosts not to exist if, in fact, they truly do exist. Because a person’s belief in ghosts creates very serious and far-reaching ramifications, it’s a topic that no Christian should ignore.

In ancient Iraq, the Epic of Gilgamesh portrayed Gilgamesh conversing with the spirit of his dead friend Enkidu. Old Egypt left a cryptic tale about the ghost of Nebusemekh chatting with the high priest of Amun-Re. Such stories prove nothing, of course, except that the concept goes back a long way. In fact, even Christ’s twelve disciples fearfully mistook Jesus for a spirit when He appeared walking on the sea at night (Mark 6:49).

Homer included ghosts in his Odyssey and Iliad, and Shakespeare cast roles for spirits in Hamlet and Macbeth. Whether these authors believed in ghosts is unknown. What they understood, however, is that a truly chilling ghost story can grip an audience.

Yes, ghost stories have been around for ages, and some (such as Charles Dickens’s A Christmas Carol) have become fixtures in modern culture. However, in recent decades the genre has exploded with an abundance of movies (Field of Dreams, The Haunting in Connecticut, The Sixth Sense, as examples) and TV shows (such as Lost and Ghost Whisperer) that depend on spirits to drive the plots. Nonfiction programs such as Ghost Hunters attempt to investigate claims of ghosts using infrared cameras and other devices.

Does a diet of such entertainment influence anyone? Undoubtedly. In 2006 the Barna Group published the results of nationwide studies involving more than 4,000 teens. The study found that 73% of the youth surveyed had “engaged in at least one type of psychic or witchcraft-related activity, beyond mere media exposure or horoscope usage.” One tenth had participated in séances. Nine percent had visited a supposed medium or spiritual guide.

The Barna Group’s vice president noted that teens “cut and paste supernatural experiences and perspectives from a variety of sources—from the movies and books they read, from their experiences, from the Internet, from their peers and families, from any place they’re comfortable with.” This is a problem for adults as well.

An astounding find is that only 28% of churched teenagers could recall hearing any teaching at church in the past year that helped to define their understanding of the supernatural. Is it any wonder that so many teens enter adulthood without the answers they need on this topic?  Continue reading

Going against God “just for fun By Marsha West

READ OUR WHITE PAPER ON THE OCCULT-SORCERY

Do you like guessing games?
Houses taken over: Letting the government get its nose under the church tent

One Response to Do You Believe in Ghosts?