Posted By Marsha West on May 19, 2016 in Culture War, Liberalism, Politics
Share

For those of us in a discernment ministry, a better question to ask is: Why don’t Christian leaders name the enemy?

But this is not about cowardly Christian luminaries who are averse to naming names because they fear man far more than they fear God; it’s about the Grand Old Party, the party of conservative Americans. (GOP intelligentsia who hold court over the “party of ideas” has finally gotten the message that there’s a wide divide between them and your run-of-the-mill conservative who have come up with their own ideas about what’s best for the country.  But I digress.)

So – who is this enemy Republican leadership will not name?  The Left, declares columnist, author and radio talk-show host Dennis Prager.

In a piece published over at National Review, Prager blames the Left for destroying the foundational values of this country, including free speech. “Our colleges have been ruined, free speech is increasingly suppressed, the economy is stagnant and the debt doubling, young Americans no longer see America as in any way exceptional — all because of the Left. But almost no one dares mention the word.”

Now listen to the rest of the story… 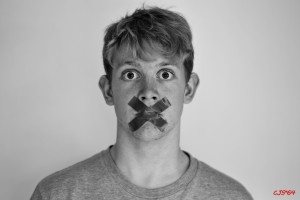 Many young people no longer see America as exceptional.  Why? Because of the Left.  Yet the Right does not mention the word

You have to salute their good intentions. But as well-intentioned and accurate as their critique is, the Bloomberg-Koch column is largely useless.

Why? Because it assiduously avoids identifying who or what is causing our universities to mimic fascist institutions — ruining dissenters’ careers, penalizing dissenting students, not hiring dissenting professors, disinviting some among the few invited speakers with whom the majority differs, shouting down dissenting speakers, allowing students and faculty to take over and forcibly occupy college administrators’ offices, etc.

The Bloomberg-Koch column is like going to your doctor and getting back a fully accurate report that you are dying — without hinting at why you are.

Why do Bloomberg and Koch not mention the word “Left” (or “Progressive” or “liberal”) even once? The entire deterioration of the American university (and the high school and elementary school) is the result of leftist influence. How could they not mention it?

One hint at an explanation is the one example Bloomberg and Koch give of shutting down a speaker at a campus — that of former secretary of state Madeleine Albright, a liberal. The ratio of left to right speakers invited to American campuses is about a hundred to one. And of the thousands of liberal-left speakers, you would be hard-pressed to come up with five examples of them being shouted down and driven from the microphone. Yet the authors’ one example of a silenced speaker at a university was of one of the few liberals ever shut down.

So why did they choose this outlier as their example? Lest, God forbid, a reader infer that the suppression of free speech on American college campuses is overwhelmingly the Left suppressing the Right.

The Left is destroying the foundational values of this country — including, but hardly limited to, free speech. The Los Angeles Times actually announced that it will not publish a letter to the editor — presumably no matter how pre-eminent the scientist who wrote the letter — that challenges the anthropocentric-global-warming-leading-to-worldwide-destruction hypothesis. Likewise, Popular Science announced it would not even allow such opinions in the comments section on its website.  Continue reading

Bathrooms are just the beginning: a scary look into the trans movement’s end goals
Move of God or Movements of Men . . . Connecting the Dots

3 Responses to Why Don’t Republicans Name the Enemy?