Posted By Marsha West on June 10, 2015 in Homosexual Agenda
Share

Steam is coming out of my ears.  For the first time in 20 years the U.S. Army brass says it will not provide an honor guard from nearby Fort Gordon for Abilene Baptist Church’s annual Independence Day celebration because of a 2011 regulation instituted by the Obama Administration.  The regulation declares that the Army cannot participate in any event that promotes a religious movement. Yet the Pentagon promotes LGBT “Pride Month”?  There is something wrong with this picture.

According to Christian Examiner: 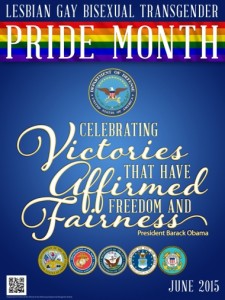 In a ceremony that included openly gay Brig. Gen. Randy Taylor and his husband, Lucas, Carter said the Pentagon took pride in how gay and lesbian members of the military are now “free to serve their country openly.”

“We believe in getting to a place where no one serves in silence, and where we treat all our soldiers, sailors, airmen, and Marines with the dignity, and the respect, that they deserve,” Carter said. “Looking back, gays and lesbians have long defended our country in uniform – and there are thousands of stories that illustrate their willingness to serve, and to sacrifice.”

Carter cited the example multiple service members who had been killed or wounded in combat and who were gay or lesbian. One of those was 20-year-old Army Green Beret Lloyd Darling, killed in 1968 while defending his teammates during a firefight with the North Vietnamese Army.

“The Department of Defense has made a lasting commitment to living the values we defend – to treating everyone equally – because we need to be a meritocracy. We have to focus relentlessly on our mission, which means the thing that matters most about a person is what they can contribute to national defense,” Carter said.

Carter said the military recently completed updates to its equal opportunity policy to include protections based on sexual orientation, “ensuring that the department, like the rest of the federal government, treats sexual-orientation-based discrimination the same way it treats discrimination based on race, religion, color, sex, age, and national origin.”

According to Carter, excluding homosexuals from service is “bad defense policy” that weakens the military.

In February, Carter also announced the appointment of Eric Fanning to the position of chief of staff. Fanning, formerly the acting Secretary of the Air Force, is openly gay. Fanning has never served in uniform and is a former public relations executive and was a White House staffer during the Clinton administration. Continue reading

Saddleback Church raising $71 million for its largest expansion yet
Which Way, Evangelicals? There is Nowhere to Hide