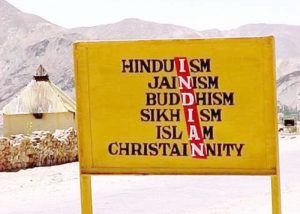 Mike Riccardi of The Cripplegate lays out some of the the problems that can result from trying to mix oil with water, as you will see in the case of trying to mix liberalism and historic orthodox Christianity. The result is that the Person and work of Jesus Christ has been compromised for the sake of unity.  And what we now have is a liberal/progressive “social justice gospel” that saves no one. Those pushing for ecumenicism may have started out with good intentions, but as the saying goes, “The road to hell is paved with good intentions.”

One example Riccardi offers of someone’s good intentions paving the road to hell is the Rev. Billy Graham, who has been highly criticized for his ecumenical beliefs. In a quote from a 1997 interview with heretic Robert Schuller, the well-known and highly regarded evangelist demonstrated the inevitable end of ecumenism when he said to Schuller:

“I think that everybody that loves or knows Christ, whether they are conscious of it or not, they are members of the body of Christ. . . . They may not know the name of Jesus but they know in their hearts that they need something they do not have, and they turn to the only light they have, and I think that they are saved and going to be with us in heaven.”

Mike Riccardi has the story of the ecumenical movement that we urge you to read. He writes:

One of the most devastating attacks on the life and health of the church throughout all of church history has been what is known as the ecumenical movement—the downplaying of doctrine in order to foster partnership in ministry between (a) genuine Christians and (b) people who were willing to call themselves Christians but who rejected fundamental Christian doctrines.

In the latter half of the 19th century, theological liberalism fundamentally redefined what it meant to be a Christian. It had nothing to do, they said, with believing in doctrine. It didn’t matter if you believed in an inerrant Bible; the scholarship of the day had debunked that! It didn’t matter if you believed in the virgin birth and the deity of Christ; modern science disproved that! It didn’t matter if you embraced penal substitutionary atonement; blood sacrifice and a wrathful God are just primitive and obscene, and besides, man is not fundamentally sinful but basically good! What mattered was one’s experience of Christ, and whether we live like Christ. “And we don’t need doctrine to do that!” they said. “Doctrine divides!” Iain Murray wrote of that sentiment, “‘Christianity is life, not doctrine,’ was the great cry. The promise was that Christianity would advance wonderfully if it was no longer shackled by insistence on doctrines and orthodox beliefs” (“Divisive Unity,” 233).

The Emergence of the Social Gospel

The result of this kind of thinking was the social gospel of the early 20th century. If what it means to be a Christian has little to do with creeds and everything to do with deeds, then what makes someone a Christian is whether they’re laboring for the betterment of society—feeding the hungry, sheltering the homeless, working for justice, and so on. And so across denominational lines, professing “Christians” were coming together to promote unity around a common mission, even if they didn’t share a common faith. In 1908, more than 30 denominations representing over 18 million American Protestants set their doctrinal differences aside and met in Philadelphia at what is called the Federal Council of Churches. Their great concern was not the Gospel, but how to address the social issues of the day: race relations, international justice, reducing armaments, education, and regulating the consumption of alcohol. This was the beginning of the modern ecumenical movement.

Now, in each of these denominations there were faithful Christians who recognized that—as much as social ills mattered—the body of Christ was not defined most fundamentally by a common social agenda, but by a common confession of faith in the Christ of Scripture. These faithful men, led by the great Presbyterian professor J. Gresham Machen, among others, understood that there were certain fundamental truths that no one claiming to be a Christian could deny. A Christ who is not fully God is a fundamentally different Christ than one who is fully God. A salvation that can be more-or-less earned through good morals and good deeds is a fundamentally different salvation than the one purchased freely on the cross by our wrath-bearing Substitute. A religion built upon the authority of man’s ideas is a fundamentally different religion than one built upon the authority of God as revealed in Scripture. And so these men—pejoratively labeled Fundamentalists—insisted that the doctrinal fundamentals of the Christian faith were non-negotiable, and that, if they were abandoned, it didn’t matter how many people-who-called-themselves-Christians you could gather into one place: there was no true unity. Continue reading

7 Responses to Ecumenical vs. Evangelical