Is the office of apostle and prophet in the midst of being re-established, as some people would have us believe? And is the God-ordained government of the Church now in place for the first time since the early days of the initial believers of the first 300 years? Churchwatch Central (CWC) continues to expose a diabolical movement that has infiltrated the visible Church known as the New Apostolic Reformation (NAR). In this piece, CWC reveals that from the very beginning of the movement the wolves in sheep’s clothing mentioned above were fully aware of and on board with the plan to lay the foundation for a global church governed by them. 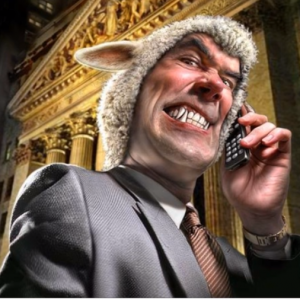 Shultz published what he called “Eyewitness Reports”. Accessing three articles, we highlight how all of these Apostles are fully aware of the New Apostolic Reformation (NAR), what they were involved in and what they were to advocate as leading NAR Apostles and Prophets.

It is important to observe that ‘Anita’ (in part 3) noted Wagner openly talking about the New Apostolic Reformation and apostolic governance. NAR Apostle Dutch Sheets also attempted to recruit people at this event to “volunteer for God’s Army’, threatening them that if they refused to volunteer that God will draft them, “and it will be painful.”

What makes this article fascinating is the mindset of the NARpostles back in 1999. They are extremely superstitious, into omen readings, fearful of events (like the Y2K bug and terrorism) and completely obsessed with their apostolic strategies, prophecies and future direction of the church. Their language and concepts all reinforce the false gospel, eschatology, pneumatology and basileology of the New Apostolic Reformation. Titles such as ‘Third Day Church’ and concepts regarding the Jordan River all portray these leaders as Joshua’s (Apostles) leading the ‘church’ into the ‘promised land’, to further their idea of what the kingdom of God is in society.

These articles from eyewitnesses, published on the ElijahList, prove that Mike Bickle, who is involved in this movement and its leaders, is a deceiver. You can read his denial of being involved with the NAR here:

So why was this event so important to all those gathered?

According to eyewitnesses, “The central theme of the conference was that the office of apostle is now being firmly established putting the God-ordained government of the church in place for the first time since the early days of the initial believers of the first 300 years.”

People were convinced at this event that (emphasis added),

“The church was awakened to evangelism, prophetic, and now the apostolic. All are called to work together under the apostle in each body of believers, especially prophet to apostle, (as a watchman to a king). The prophet will bring prophecies to the pastor (apostle), and the pastor has the final say on what to do with it. The Light grows brighter as the pieces are in place for world revival (and world persecution and hatred of Christians) such as has never been seen before.”

Notice that the pastor can be the apostle in their double-speak and how they connect the prophet to the Old Testament ‘watchman’ and the pastor/apostle to a ‘king’. This cannot be missed when dealing with these cult-leaders. They will often convey their positions of authority in the church as though they are in divinely appointed king-like authorities. They twist phrases like “touch not God’s anointed” – King Saul was not to be touched because he was anointed by God, thus none should question the apostle/pastor such as Benny Hinn, Creflo Dollar, Kenneth Copeland and others.

Furthermore, just as we see with Dr. Michael Brown’s eschatology, these apostles believe in the doomsday cult prophecies of the New Order of the Latter Rain end-times revival/awakening. The above quote highlights their belief in a 50/50 polarization of good and evil. The church will awaken when their Apostles and Prophets take their place and the New Breed manifest as ‘gods’ to judge the wicked.

It’s also important to note that an eyewitness reported the following,

“Many taught out of Joshua 3 & likened the Church to being mid-stream in the “transition” across the Jordan into the “harvest field”.“

It is important to stress again that NARpostles are often called ‘General’ and ‘Joshua’ to lead the church into the ‘Promised Land’. The second baptism is often used as symbolic of crossing the Jordan while ‘Joshuas’ lead the church to war taking the cities and nations for God.

You can see this overtly expressed in article 3 where ‘Anita’ notes, “The Jordan speaks of death — the Apostolic is holding water back for God’s people to cross over the river. Many things are dying — old ways, practices, etc.” The ‘old ways’ are denominations and orthodox Christianity itself. These NAR leaders are claiming that God Himself is redefining the church – what they call the ‘New Wine Skin’. This is all code talk to advocate for the Dominionist heresy. The fact that “many taught” on this is an indictment on those who deny that the NAR is dominionist.

Don’t forget that Apostle Dutch Sheets really took the dominionist agenda of the NAR personally suggesting they were going to take over the churches of America and the entire nation.   Continue reading

Leaving IHOP and the NAR: Sammy’s story
Tell Jimmy Carter about the Damage of Homosexuality