During a recent speaking engagement,* popular preacher and author Francis Chan told the group that God will destroy anyone who questions or criticizes the teachings of Christian leaders. Steven Kozar of Messed Up Church has the story which includes a must watch video of Bethel’s guest speaker so that we can see for ourselves that he was not kidding around; he was as serious as a heart attack. 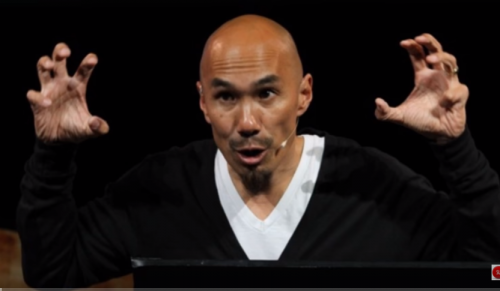 There’s a recent video sermon from Francis Chan which has eerie similarities to a cult leader indoctrinating his followers. His basic argument is this:

In this sermon, Francis Chan merges and tangles two different topics into a frightening blend of confusion; on one hand he talks about people who gossip and complain about their fellow believers, but on the other hand, he talks about all doctrinal differences as if they were mere preferences. While his comments about gossiping apply to personal relationships, his comments about unifying with everyone who claims to “love the Lord” are very concerning to anyone who takes the Bible seriously.

(Correction: Chan made these comments at a church named Bethel, but not the Bethel Church in Redding, California, as previously reported. We apologize for the error.)