Posted By Marsha West on May 23, 2015 in Homosexual Agenda
Share 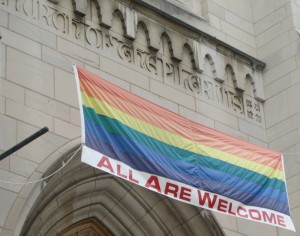 DUBLIN (Reuters) – Gay couples flocked to central Dublin to celebrate a “historic watershed” on Saturday as a large majority in the traditionally Catholic country voted to allow same-sex marriage, the culmination of a four-decade struggle for gay rights.

Waving rainbow flags, embracing and crying, two thousand people gathered to watch the official results in the courtyard of Dublin Castle after voters, young and old, accounted for one of the highest turnouts in a referendum for decades.

“The amount of people who came out to vote is just such an emotional thing for us,” said Fred Schelbaum, 48, standing with his civil partner Feargal Scott, 43, who he said he intended to marry.

“Up to now a lot of gay people felt they were tolerated in Ireland. Now we know that it’s much more than that.”

The crowds cheered as gay rights icons appeared on the square, including David Norris, whose campaign led to the 1993 decriminalization of gay sex and, and Rory O’Neill, whose Panti Bliss drag queen character became the face of the campaign.