Posted By Marsha West on September 21, 2015 in Homosexual Agenda
Share 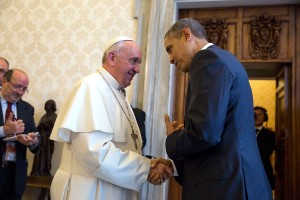 (Christian Examiner by Gregory Tomlin) GLADD-handing is a common political occurrence in Washington, D.C., but the official guest list for Pope Francis’ visit to the White House is causing the Vatican serious concern.

According to the Wall Street Journal, Vatican officials are concerned that photos featuring the pope greeting several prominent gay rights advocates and Roman Catholics who support same-sex marriage during his White House visit could be misinterpreted as the pontiff endorsing non-traditional views on the family and human sexuality.

According to the White House, retired (and now divorced) homosexual Episcopal Bishop V. Gene Robinson will be a guest, as will Nicholas Coppola, a former Roman Catholic who started a Change.org petition calling for the church to be more inclusive of gays and lesbians after he was put out of his church parish in New York.

Frank DeBernardo, executive director of the dissenting Catholic activist group New Ways Ministry, and Sister Jeannine Gramick, S.L., the organization’s co-founder, will also attend. New Ways Ministry has been shunned by both the Vatican and the U.S. Conference on Catholic Bishops for its views on LGBT issues.

GLAAD, the largest gay rights lobby nationwide, is encouraging the media to speak with disaffected Catholics who believe LGBTs should be included in Catholic life. It also sent a letter to Pope Francis in advance of the visit, encouraging the leader of Catholics worldwide to open the church’s doors to homosexuals.

“Currently, our Church’s teaching and pastoral practices surrounding LGBT people are causing an enormous pastoral crisis,as well as upholding systemic, institutionalized discrimination against LGBT people and our families. In the U.S. and around the world, we are experiencing alienation from the Church, higher rates of poverty and violence, and discrimination in employment, housing, educational opportunities, and access to health care,” the letter said.

“LGBT youth are particularly vulnerable, with nearly half of the LGBT young people in the U.S. considered to be at-risk. Lacking support at home, at school, or from faith communities, LGBT youth suffer bullying, experience depression, self-mutilate, attempt suicide, use drugs, become homeless or enter foster care at rates far higher than non-LGBT youth. This is a crisis that the church can help to address through effective pastoral care and programs that provides love and support for these youth.”

GLAAD also issued a media guide for journalists who wish to interview the pontiff and write about homosexual issues.

During a press conference Sept. 17, White House Press Secretary Josh Earnest was asked if the guest list – which also includes a transgender woman and several abortion rights advocates – was meant to “send a message or make a statement.”

Earnest said he believed it best not to draw conclusions “about one or two or maybe even three people who may be on the guest list, because there will be 15,000 other people there, too.”  Continue reading

READ OUR WHITE PAPER ON THE HOMOSEXUAL AGENDA

C. Peter Wagner: “NAR is not a cult!”
Phyllis Tickle, who championed a church paradigm shift, is dead