Lighthouse Trails is offering a new booklet tract by Maria Kneas and John Lanagan.  The booklet reveals the little known fact that full-blown Goddess worship developed in the 1950s. Goddess worship is embraced by the world of the occult.  Witchcraft, radical feminism and even some liberal churches is steeped in goddess worship. The occult world holds to the view that the masculine age we were in is out; we are now in a feminine age. These people view the masculine age as an age of destruction and failed relationships so they’re seeking a balance through “feminine energies.”

I’ll let Kneas and Lanagan fill in the blanks… 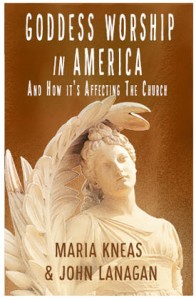 The worship of pagan goddesses is most obvious with Wiccans. However, it is also common in universities and nursing schools. It is promoted by the media and is a component of New Age feminism. What’s more, it has infiltrated mainline denominational churches and its influence can be felt throughout our society.

This movement is impacting our culture and especially the younger generation. One troubling aspect of it is that, according to some of its proponents, facts and logic are “patriarchal,” and therefore they are irrelevant. As you will see, some so-called scholars openly say it is all right to make things up and present them as if they were historical facts.

Philip G. Davis is a professor of religious studies at the University of Prince Edward Island in Canada. He wrote the book Goddess Unmasked because he saw that goddess worship was being taken seriously in religious institutions and that myths about the goddess were being taught as factual history on campus. Much of the footnoted documentation in the first section of this booklet comes from his book.

Creating a Goddess-Friendly Culture
The “Age of Enlightenment” gave birth to rationalist materialism. In reaction against this denial of the importance of emotions, a generation of Romantic poets, novelists, artists, musicians and philosophers developed. Many of them were involved with drugs, the occult, Rosicrucianism, or Freemasonry.

Following Darwin’s theory of evolution, they speculated wildly about the evolution of society. Nationalism became a romantic search for pagan roots, as seen in Wagner’s operas and the fairy tales researched by the Brothers Grimm. Womanhood was idealized. The myth of a past utopian matriarchy was developed. Psychologist Carl Jung idealized the concept of the “anima,” the feminine side of man.1

Romanticism even invaded history and archaeology. Bachoven developed a theory of matriarchy openly based on imagination and not on searching for hard facts. Feminist scholars followed Bachoven’s lead. A historic myth was developed in which an ideal, matriarchal, goddess-worshiping society was destroyed by patriarchal invaders who brought with them all the ills of modern society.2

The scholarship involved in these studies of history and archaeology is so faulty that Philip Davis says:

An important lesson of this book is the ease with which patent falsehoods may clothe themselves in the garb of scholarship and masquerade as truth.3

Feminist scholars and other academic radicals say objective facts and historical accuracy are not even a valid goal:

A feminist scholar told her audience that it is indeed “ethical” for an historian to ignore historical evidence in order to construct a narrative . . . while still presenting it as history.4

In addition to “constructing narratives” (i.e., making up stories and presenting it as history), many academic radicals “explicitly reject the quest for objective truth; they claim that objectivity is not only impossible to achieve in pure form, but actually illegitimate in the first place because it expresses a patriarchal, oppressive mentality.”5

Before full-blown goddess worship developed in the 1950s, American art showed popular imagination being prepared for it. For example, the Statue of Liberty looks like a Greek goddess and is over three hundred feet high. The inscription presents the statue as speaking, and she calls herself “Mother of Exiles.”  A 1915 poster for the Red Cross shows an American nurse with a billowing, hooded cape that makes her look like a cross between a nurse and a Greek goddess. She carries a placard which says:

I am the Red Cross of Peace. I heal the wounds of war. I am a refuge from fire, flood and pestilence. The love of little children is mine.7

The National Academy of Sciences has a Great Hall done in Byzantine architecture designed to look like a “temple of science.” The dome of that hall looks like it belongs in a cathedral, except it has figures that look like Greek goddesses. Science is personified as a goddess, with an inscription that says:

To science, pilot of industry, conqueror of disease, multiplier of the harvest, explorer of the universe, revealer of nature’s laws, eternal guide to truth.8  Continue reading

See our White Paper on the Occult-sorcery