This is the title of a piece published in Elle magazine. Denny Burk, Professor of Biblical Studies at Boyce College, added “what gospel” to the title because the author, Ruth S. Barrett, wasn’t talking about the true Gospel of Jesus Christ, as Burk makes clear in his blog post. But before we get to that, you need to know that in November 2016 we reported that “Christian” blogger Glennon Doyle Melton came out as a lesbian.  At that time Doyle Melton was thought of as a “truth teller, someone who had helped countless people through her online community, Momastery, and in her work with Together Rising.”   She was known for her honesty about alcohol addiction, anxiety, depression, an eating disorder and, not surprisingly, her dysfunctional marriage to Craig.  Due in part to his serial infidelity, Glennon filed for divorce.  Shortly thereafter she began dating soccer star Abby Wambach. The couple tied the knot in May. Many people, including professing Christians, celebrated her “coming out.” And when she “married” her lesbian lover, a lot of folks, including those same Christians, celebrated their union.

Denny Burk wonders if people would be celebrating the divorce in the same way if she had left her husband for another man. “Probably not,” he says. Why? “Because ‘coming-out’ and embracing gay identity is seen as sacrosanct in our culture–even more holy than the covenant of marriage. Even more important than maintaining one’s wedding vows.” 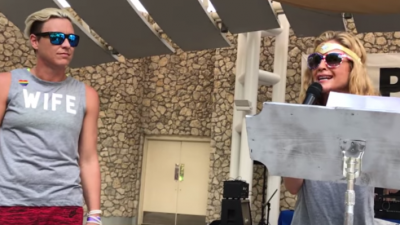 Elle magazine has published a long-form essay on famous mommy-blogger Glennon Doyle Melton. Until Melton divorced her husband and came out as a lesbian last year, I really didn’t even know who she was. Even so, she has been a popular blogger and writer for a number of years, especially among women. Her openness about her imperfect life has endeared her to millions of readers, many of whom are Christians. Anyway, the Elle feature tells her story, which I won’t rehearse here. I encourage you to read the piece for the full account. Nevertheless, I would offer a handful of reflections on the essay:

1. I have never been a reader of Melton, so I am coming at this as someone with very little knowledge of her. Still, it is striking that for someone who was billed as a “Christian” writer, there is nothing about her in this article that would suggest that she held to the Christian gospel. Maybe she did at some point. But it is absent even in the part that narrates her “conversion.” Perhaps readers more familiar with her work can weigh-in on this, but I still thought that was a conspicuous absence.

2. Even before her coming-out, this article says that her fellow travelers were the likes of Rob Bell and other pop-spirituality/self-help gurus. It also says that she has been a member of the United Church of Christ–a “church” that sanctifies sexually immoral relationships. Were these items red flags to Christian readers before her coming-out? It seems like they should have been.

3. The author of the article emphasizes that Melton’s authenticity and openness about her imperfect “messy” life is what made her so popular–even among non-Christians. It seems that there is a lesson in this. An air of “authenticity” and “messiness” is no substitute for authentic Christian faithfulness. We would all do well to learn how to tell the difference.

4. The story of Melton’s coming-out was particularly sad–and perhaps even a little bit dishonest. Melton did not merely come out as a lesbian. She divorced her husband to pursue a relationship with a woman that she had fallen in love with. Her husband’s description of his experience is worth considering in his own words:

As for Craig, he remembers receiving an urgent text message from Glennon one afternoon, saying she had something very serious to discuss. “It sounded like 911, like Code Red,” he tells me over the phone. “I rushed home. On the way, I was thinking, Either she has cancer, or she’s gay.” (Obviously Craig isn’t as clueless as he’s sometimes portrayed to be.)

When he found out it wasn’t cancer, “I hit the floor bawling,” he says. “I was just so happy she wasn’t going to die.” Then came a wave of “sadness, confusion, and anger,” he says. “I thought we had been doing things the right way. Both of us had been working on ourselves. We’d entered a phase that was supposed to be a new life for us. It was a shock. It felt like the end of the world.”

But eventually, Craig says, he felt he had no choice but to accept his new reality. Glennon and Abby are, after all, “two women following their hearts,” he says, slipping into Glennon-speak. “Isn’t that what life is all about? Finding true love? If Glennon is happy, and Abby is happy, and the kids are thriving, what’s wrong with that?” Now he shares joint custody of the children with Melton, and he recently accepted a new job in technology sales.

There’s no question that both spouses played a part in the dissolution of the marriage. But still, it is striking that Craig is unable to lament the end of his marriage. He is obviously grieved over the loss, but he does not even hint that anything wrong has happened. Because his wife fell in love with a woman, she is to be celebrated for divorcing him. But would people be celebrating the divorce in the same way if she had left him for another man? Probably not. Why? Because “coming-out” and embracing gay identity is seen as sacrosanct in our culture–even more holy than the covenant of marriage. Even more important than maintaining one’s wedding vows.

The result is that the divorce gets whitewashed. Its impact on the husband and children is almost completely a non-factor in the story. The central factor is Melton’s personal happiness and self-fulfillment. And that is why so many of her readers feel empowered to pursue divorce instead of sticking it out through tough times in their own marriages. Here is a telling comment from a marriage counselor interviewed for the article:

“She puts a knot in my stomach,” says couples therapist Michele Weiner-Davis, whose latest book is called Healing From Infidelity. “I can’t count how many times I hear women quoting her when they come into my office. On the positive side, she wants to empower women. But the fact is, most people don’t do divorce all that well, especially when children are involved. She’s strengthening their conviction that they need to get away from their husbands, instead of learning to work through challenging issues. Sometimes you have to be a warrior to stay.” Continue reading

Check out our White Paper on the Homosexual Agenda

Hey Bill Johnson and Bethel Church, God Put Himself in a Box Called “Bible”
A subtle and dangerous shift in Christianity

6 Responses to “The Gospel according to Glennon”: What gospel?