“Hillsong is seen as this hip, progressive church that’s drawn huge millennial crowds, but it’s still evangelical,” co-host of “The View” Sara Haines stated to Cark Lentz. “So, where do you stand on social issues that young people are particularly passionate about, like gay marriage [and] abortion? Like, how do you address those types of things?” His response:  “God is the judge.” Lenz went on to say that he’d prefer to know a person’s name and beliefs before making a determination as to whether or not they have sinned.  Christians reacted with anger about the way in which Carl Lentz represented Christ and His church. When given an opportunity to contend earnestly for the Christian faith (Jude 1:3) he failed miserably. Some called him a coward.

Well, the pastor took umbrage at all the criticism he was receiving and responded by saying that Christians who have issues with his comments follow a different Jesus.

Churchwatch Central, a blog that has reported on Hillsong Church for a number of years, makes the case that it is actually Hillsong that follows a very…different…Jesus.  Now listen as CWC presents the evidence: 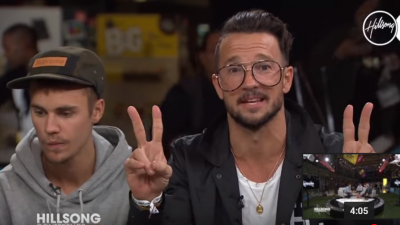 Brian Houston says that Hillsong started with his father Frank Houston back in 1977, known then as Christian Life Center. In 2014, a Royal Commission discovered that the founder Frank Houston was a serial pedophile and had his crimes covered up by his son, Brian Houston from as early as 1999 (see evidence of Royal Commission Case 18 – specifically Brian Houston’s correspondence with Barbara Taylor, AOG Executive and victim AHA).

Knowing this, many Hillsong followers insist that this serial pedophile was called by God. At face value, if this was any other religious group, Hillsong would be branded internationally as a dangerous cult. With their emphasis on the prosperity gospel and their teaching to blindly submit to Apostles Frank and Brian Houston and their ‘vision’, even the most biblically illiterate person could easily consider Hillsong a cult.

Now over the decades, Christians have seen Hillsong leaders claim that Muslims and Christians worship the same god, that God died to make you rich, that Jesus is not the only way to have a relationship with God, and you can be gay and Christian.

Finally many Christians world-wide are taking notice of Hillsong’s compromise with the most foundational doctrines and for the first time are pushing back strongly. This is especially true with Carl Lentz’ rise to stardom and his failure to stand and contend earnestly for the Christian faith. Instead of standing firm, he is shown constantly ‘shaking hands’ with the world – and in doing so, promoting hostility toward those who hold to the clear teachings of scripture.

This was clearly on display with his recent comments about abortion on the progressive liberal show ‘The View’. Now with even more Christians publicly airing their anger at how badly Carl Lentz represented Christ and His church with his commentary about abortion – Lentz now claims Christians who have issues with his statements, follow a different Jesus!  Continue reading

“God Is The Judge,” Hillsong’s Carl Lentz Tells ‘The View” When Asked Whether Or Not Abortion Is Sin

SEE OUR WHITE PAPER ON THE WORD OF FAITH/PROSPERITY MOVEMENT