Posted By Marsha West on June 21, 2015 in Homosexual Agenda 1
Share 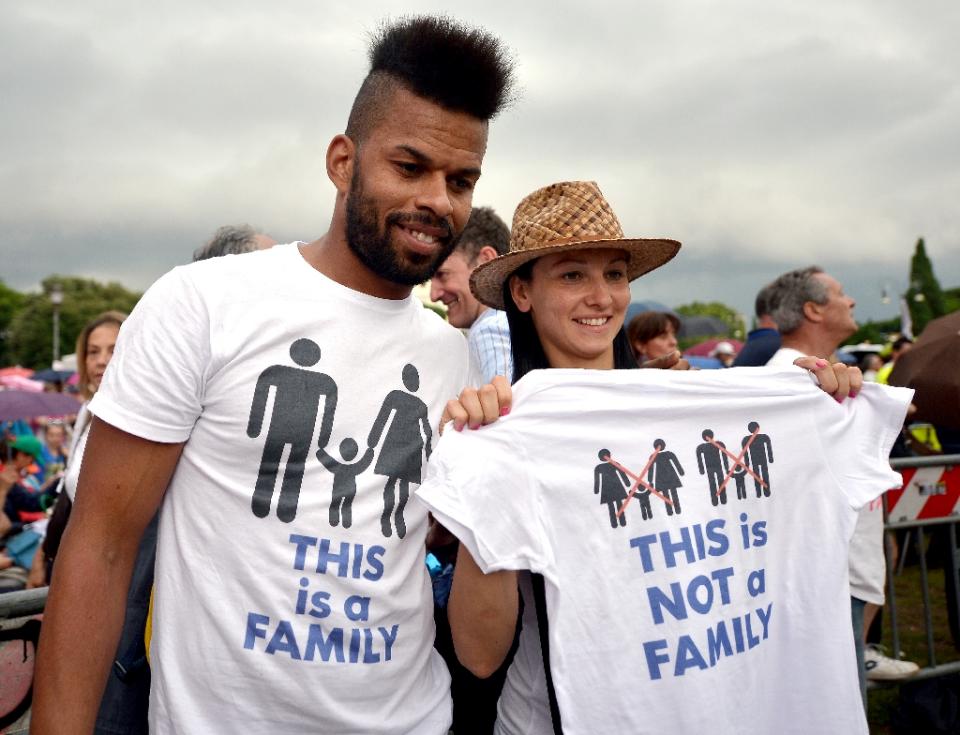 A woman holds up a T-shirt during a rally against gay unions in Rome’s San Giovanni square on June 20, 2015 (AFP Photo/Tiziana Fabi)

ROME (AFP) – Hundreds of thousands of Italians gathered in Rome Saturday to demonstrate against gay unions and the teaching of gender theories in schools, as Prime Minister Matteo Renzi tries to push a civil union bill through parliament.

Holding aloft banners reading “The family will save the world” and “Let’s defend our children”, a sea of people crammed into the San Giovanni square near the Italian capital’s historic centre to support family values.

The square, which can hold an estimated 300,000 people, was overflowing with the young, elderly and parents with toddlers, an AFP photographer said, with many more demonstrators spilling into nearby streets. Organisers for their part said one million people were taking part. Italian police never provide figures for demos.

“In my children’s schools they are talking about families made up of two fathers or two mothers, without asking parents’ permission,” said 41-year old doctor Giuseppe Ripa, adding: “It’s dangerous and wrong.”

Fellow protester Piero Uroda, a 78-year-old pharmacist, said it was “not honest to say these things to the very young, it’s not like they are students who can debate these ideas.”

“I don’t want gay marriage or gay adoption, the natural family is like ours,” he said, pointing to his relatives gathered around.  Continue reading

Would the Son of God Contradict the Father by Marsha West

CHECK OUT OUR RESEARCH PAPER ON THE HOMOSEXUAL AGENDA