Doug Evans of Asleep No More delves into IHOP-KC guru Mike Bickle’s background. Evans uncovers solid evidence that Bickle’s teaching on prayer is highly unbiblical yet, unbelievably, the man heads up a noted “Christian” prayer ministry. What are young people who flock to IHOP exposed to? Contemplative prayer.  Allow me to explain.  CP is a prayer ritual that comes from teaching associated with Roman Catholic mystics. The aim is for the participant to empty and free the mind and empower oneself. In other words, Transcendental Meditation.  (More on this below)  So there’s no question that CP’s a dangerous practice. 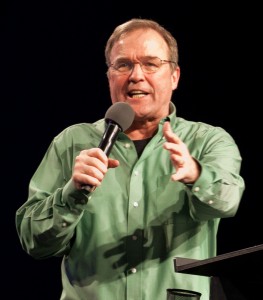 Then there’s Mike Bickle. In the 1980’s Mike was a preacher in a small church St. Louis when a man named “Augustine told him that he had heard an audible voice that told him to prophesy “by the spirit of truth” to Bickle’s congregation. Bickle allowed him to do this and was impressed by the seeming accuracy with which he described the condition of his church. In September of that same year Mike claims that while visiting Cairo, Egypt a mysterious, audible voice told him:

I am inviting you to raise up a work that will touch the ends of the earth. I have invited many people to do this thing and many people have said yes, but very few have done my will.(Source, page 60)

In 1999 Mike Bickle started the International House Of Prayer known for it’s 24/7 prayer ministry. It has since grown to establish international ties, its own seminary, and an undergraduate program along with tying itself to the New Apostolic Reformation. And when I say it’s a 24/7 prayer ministry, I mean it’s really, really, Really 24/7. Nonstop praying 24 hours a day, seven days a week. It is true that there’s no such thing as praying too much, so the idea of a ministry dedicated to non-stop prayer is a good one. But what worries Christians is the type of prayer they use. IHOP is dedicated to contemplative prayer. Here are a few quotes on contemplative prayer by Mike Bickle.

“…contemplative prayer, you gotta get over that hurdle! Barnes & Noble is prophesying it! Hurtle one we gotta understand it’s for everybody! Everybody is called to the fullness (contemplative prayer). We’re all going to go into this thing!”

What’s so wrong about contemplative prayer? First and foremost, consider the origin:

Centering Prayer is drawn from ancient prayer practices of the Christian contemplative heritage, notably the Fathers and Mothers of the Desert, Lectio Divina, (praying the scriptures), The Cloud of Unknowing, St. John of the Cross and St. Teresa of Avila. It was distilled into a simple method of prayer in the 1970’s by three Trappist monks, Fr. William Meninger, Fr. Basil Pennington and Abbot Thomas Keating at the Trappist Abbey, St. Joseph’s Abbey in Spencer, Massachusetts… During the twenty years (1961-1981) when Keating was abbot, St. Joseph’s held dialogues with Buddhist and Hindu representatives, and a Zen master gave a week-long retreat to the monks. A former Trappist monk who had become a Transcendental Meditation teacher also gave a session to the monks. (Source) Continue reading

A subtle and dangerous shift in Christianity by Marsha West

See our White Papers on Contemplative Prayer and Roman Catholicism

4 Responses to IHOP – Feeding the Undiscerning