Dr. Peter Jones begins with a response to his own question: You laugh! Like the question, Who wrote the Gospel of John? the question, Is the Pope Catholic? hardly seems to deserve a reply. Well, not until a few weeks ago.

He then reports on the reasons many people, including faithful Catholics, are asking this question in the first place.

In a blog post over at truthXchange, Dr. Jones tackles the latest controversy created by Roman Catholic leader Jorge Bergoglio, dubbed Pope Francis by the apostate Roman Catholic Church. He also comments on pop-star Katy Perry, who sang “I Kissed A Girl,” lecturing at the Vatican on the unbiblical practice of mantra meditation aka transcendental meditation, which was odd to say the least for the reason that TM has its roots in Hinduism. He writes: 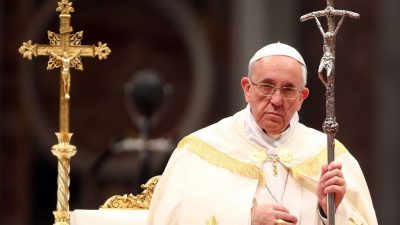 You laugh! Like the question, Who wrote the Gospel of John? the question, Is the Pope Catholic? hardly seems to deserve a reply. Well, not until a few weeks ago.

The historic catechism of the Catholic Church, (based on the Old and New Testament and on centuries of tradition) has always taught that homosexuality is immoral and that the proclivity toward same-sex relations is unnatural. It is surprising then, that the Pope said (according to a Chilean homosexual, who visited him at the Vatican), “Juan Carlos, it doesn’t matter that you’re gay. God made you that way and that is the way he wants you to be, and I don’t mind. The Pope wants you this way too, and you have to be happy with who you are.”

Such remarks cannot be explained as simple pastoral concern overriding petty doctrinal judgment. This statement compromises the history of Catholic teaching—by the head of the Catholic Church, who, according to the doctrine of papal authority, is the source of all religious truth in history. The Pope’s comment not only denies the teaching of all previous popes, but attacks God the Creator, making Him the author of sexual distortion, of sinful rebellion and of moral “abomination” (Leviticus 18:22). The Vatican press office claims that the statement was mere hearsay, saying, “The Vatican does not comment on private conversations of the Pope.” No comment?

Given the seriousness of the affirmation, one might well expect Pope Francis to correct the record personally and immediately, should he have been misquoted. The Pope has said not a word. Asked five years ago about a “gay lobby” of Jesuit priests in the Vatican, Jesuit Pope Francis responded, “If a person is gay and seeks God and has good will, who am I to judge?” Not long ago he signaled support for legal recognition of same-sex unions. And a French priest recently said in a televised interview that Pope Francis approved of his blessing of homosexual couples. The radical Archbishop Bruno Forte, who asked for “the codification of homosexual rights” at the last Synod, has been confirmed by the Pope as special Secretary to the Synod on the Family. Is it any wonder that the LGBT world applauded Pope Francis’s recruitment of fellow Jesuit, pro-LGBT Fr. James Martin, as a communications consultant to the Holy See’s Secretariat for Communications? Continue reading

SEE OUR WHITE PAPERS ON ROMAN CATHOLICISM AND THE

A Comment to the Snowflake Society: Breathe in, breathe out, move on
Dr. David Jeremiah endorses Jesus Calling