On January 18, Jerry Falwell, Jr., president of Liberty University (LU), rolled out what was called a “hero’s welcome” for GOP presidential candidate Donald Trump when he spoke at a mandatory convocation service.  LU’s motto is “Training Champions for Christ.”  Falwell received flak for giving what many felt was a personal endorsement of Trump. He told the crowd that he admired Trump’s willingness to be politically incorrect and compared him to his father and founder of LU the late Jerry Falwell, Sr. Regrettably, LU’s president wanted the students to believe that Donald Trump is a Christian, even though there is scant evidence that he’s truly born again.  (Visit this post to learn more on Trump’s faith claim.) Two days later controversial “pastor” Rich Wilkerson, Jr. spoke at the university. LU is no stranger to controversy.  Browse the 2016 speakers and you will see the names of other problematic high profile pastors, authors and entertainers.  For example:  Erwin McManus,  Jentezen Franklin, Francis Chan, James MacDonald, Ann Voskamp, Jesus Culture and more.

So now to Heather Clark’s report.  While reading about Wilkerson’s antics, bear in mind that Pastor Rick Warren once offered a list of the the top 100 senior pastors that he recommends his fans follow on Twitter.  Wilkerson was #74 on the list. 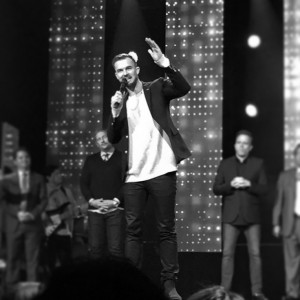 A reality star hipster “pastor” who is known for marrying Playboy cover model Kim Kardashian to blasphemous “I Am a God” rapper Kanye West, and for collaborating with West on the script for his “Yeezus” tour and other projects, was welcomed Wednesday by Liberty University, which heralds itself as being the world’s largest Christian university, to address students during convocation.

The preview shows Wilkerson getting a tattoo, lying on the beach with his bikini-clad wife, and telling his parents that he plans to hold his first service at a bar.

“In recent months, the themes of Wilkerson’s sermons have been based on songs from the Top 40: Drake’s ‘Worst Behavior,’ DJ Snake and Lil Jon’s club thumper ‘Turn Down for What,’ Beyoncé’s ‘Drunk in Love,’” the Miami New Times reports.

“His messages take surprising detours on their way to the gospel. He might roll out a story about pissing his pants as a kid, talk about marital sex, or even point out the church’s proximity to Miami’s strip joints,” it outlines.

Wilkerson, who previously led a 1,500-member young adult group called “The Rendezvous” at his father’s Trinity Church, was put into the spotlight in 2014 after he officiated the wedding of profanity-laden rapper Kanye West, known for songs such as “I Am a God,” “Drunk and Hot Girls,” “Hold My Liquor” and “Jesus Walks,” to Playboy cover model Kim Kardashian, the step-daughter of Bruce Jenner.

He had met the couple two years prior after they visited his father’s congregation.

“It began a relationship; we (Wilkerson and West) started emailing and calling each other. We collaborated on a few things: art, fashion, music, Jesus,” Wilkerson told People Magazine last year. “He invited me to write a few things for his tour, and I’ve been able to counsel him on a few things.”

Wilkerson is stated to have helped with the script for West’s “Yeezus” tour, where West brought a man dressed as Jesus on stage during a show in Seattle.

West provided the artwork for Wilkerson’s new book “Sandcastle Kings,” which was released in November.

“Kanye is a really good friend,” Wilkerson told reporters. “We chat every week about different things … He’s an amazing artist and designer, and with my first book coming out, I thought it would be fun for him to design the cover.”

Pop star Justin Bieber also visited the congregation, and Wilkerson recently praised him in an interview with Cosmopolitan.  Continue reading

Past Controversial Speakers At Liberty University