Elizabeth Prata of The End Time is to be commended for tackling such a controversial topic as this one will surely be.  Full disclosure: My husband and I are fans of Fixer Upper and regularly watch the show.  So when I came across Elizabeth’s blog post, my first thought was, “Uh-oh.”  Nevertheless, I felt I should read her report because Chip and Joanna are professing Christians.  (They must be for real because this season high-profile author and pastor Max Lucado appeared briefly on the show.)  So I dived into the first installment and learned all sorts of things about the Gaines family I wouldn’t otherwise know. Part  1 of Elizabeth’s reporting is “fair & balanced.”

One last comment.  When someone shares his or her testimony, the thing we need to ask ourselves is, Does it line up with Scripture?  In other words, has the person communicated the true gospel of Jesus Christ?  Since this is the best news a person will ever hear it’s important that people hear precisely what is described in the infallible scriptures.  There is only one gospel, “there is no other; and to change its substance is to pervert and indeed destroy it. This Gospel is so simple that small children can understand it, and it is so profound that studies by the wisest theologians will never exhaust its riches.” (Source)

Now to Elizabeth Prata’s expose on Chip and Joanna Gaines: 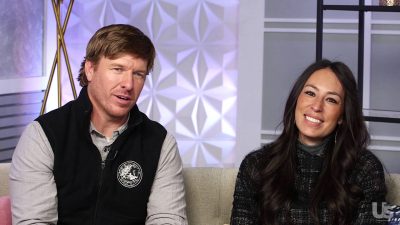 In addition, though economic necessity sometimes force a couple to make a tough decision for the mom to work outside the home, and the Bible does leave some room for couples to make their decisions, in the Gaines’ case working such long hours outside the home was not necessary. Chip has always been good at making money. He made $30,000 the first year he was out of college, after having started and sold two businesses already while in college. Joanna’s store was also doing well at the time. But more on their lifestyle in the next part.Several years ago a Waco business developer/realty/design/construction company generally named Magnolia run by Chip and Joanna Gaines were contacted to star in a HGTV fixer upper show. The first episode aired in April 2014 and has become an instant hit for the network. Ratings in the first season were through the roof. This phenomenon was largely attributed to the couple’s likability and charisma, good looks, and business savvy.

It is also attributed to the couples’ Christian faith. This World Magazine article lays it out, even stating that the reception to the couple in the form of ratings has “launched a Christian revolution at HGTV”:

The difference, at least in all the conversations I’ve had, is that while doing stunning work, the Gaineses consistently reflect an unassuming,recognizable Christianity. … But even these obvious clues don’t quite capture the subtle loving-kindness the Gaineses exemplify in their interactions with each other and their children. When the first episode of Fixer Upper debuted in April 2014, after watching for only a few minutes, with no clear evidence, I had a strong presentiment I was seeing fellow members of the body. A little web searching confirmed it.

The couple seemed genuinely in love. The pair seemed like dependable, loving parents. In its first season the show was just nice.

So why am I writing about them?

One reason is because the show has taken on massive proportions, huge ratings, and as World Mag says, the husband and wife team are the catalyst for more ‘Christian’ programming at HGTV. Since the Gaines’s have a national platform in which to showcase their Christianity, we look at their testimony.

Also, because of hypocrisy. No matter the celebrity, or perhaps because of celebrity status, we want to make sure of who we are touting and promoting. What brand of Christianity do they adhere to? Do they live what they say they live? The Bereans said they would listen to Paul but then go back and examine what Paul taught (Acts 17:11). Paul welcomed transparency to examine his doctrine, and he was the biggest Christian celebrity of his time. Later when Paul’s integrity was attacked, he defended his lifestyle, because integrity in life mattered as much as the doctrine he taught. (2 Corinthians 5:11–15).

Therefore, my examination of the Gaines phenomenon will be two parts. This part 1 will examine Mrs Gaines’ testimony, the doctrine portion. The next part will look at their lifestyle.

I mean them no harm and I’m truly happy the couple who has worked very hard for a long time on their business goals and ambitions, are seeing them come to fruition today. I am glad that they have opportunity in interviews to share about their faith and their church. Their long-term and more recent financial bounty has afforded them opportunities to give and support others in a blessed way, as Chip hinted in one interview. I am grateful that they love each other and are raising their children with good values, from at least what we can see through the lens of what is shown to us on camera. They are attributed with almost single-handedly revitalizing the Waco downtown with business, art, and tourism, something that every small town or city hopes for. Because of the Gaines’ an entire cable channel is looking for more Christians to produce a show around. These are all good things.

That’s what makes raising these issues even harder.

Recently Mrs Gaines’ alma mater, Baylor University in Waco, produced a video which has since gone viral with over 4.5 million views on Youtube alone, in which Mrs Gaines is given over four minutes to testify to the glory of Jesus Christ and her gracious salvation. And here is where it gets troubling. Mrs Gaines used the time to speak not of sin, grace, redemption, and Jesus, though she mentioned Him once at the end. But instead the video is a testimonial to Mrs Gaines’ ambitions, Mrs Gaines’ dreams, Mrs Gaines’ plans, and how God was going to fulfill them by giving her what she wants.

We learn in the video that Mrs Gaines always knew God was going to fulfill her business dreams because He directly told her, specifically and clearly. She mentions 4 times in the 4 minute video that God spoke to her. Her story, which remains consistent in interviews as well as the testimony video, is that when her two children were young God spoke to her and said she had to close her store which had been open for two years. In the first two quotes below, in order to salve her disappointment at having her dreams of running a business shattered just so she could perform her biblical function as a mother, God comforted her thus-And she knows this because He personally told her so.

“I heard Him specifically say, ‘Joanna, I have a calling for you. You’re going to have a platform one day.'”

I really felt like God was saying, ‘Hey, I want you home, I want you raising these babies at home at this age.'”

I heard God say very clearly, ‘If you trust me with your dreams, I’m going to take Magnolia further than you even dreamed. Just trust me.’ And I remember hearing that and feeling completely peaceful about it, and I walked away.”

God is not a dream-fulfilling machine. God is not speaking to Joanna Gaines. There is no need to hear the voice of God personally direct a mother to stay home and raise her children when the Bible indicates that her entire orientation should already mainly be to stay home and raise the children anyway. (Titus 2:3-5, 1 Timothy 5:14). God places a priority on the woman’s direct involvement at home.

ut please note that Joanna’s dream in the video that God was going to fulfill was the business, not the children. I’m not saying she isn’t a good mother, I don’t know that she is or isn’t. I do know that on the show there is frequent mention of passing the children for child care to an extended family member or a babysitter. I do know that they incessantly showcase the children on the show. I am saying that when you’ve been given 4 minutes to testify to the important things about your salvation, the items one would expect to hear are absent. She chose to focus entirely on God fulfilling her business dream.

After the store closure in 2005, Chip and Joanna Gaines had two more children. They now have four kids, Drake (age 11), Ella (9), Duke (7) and Emmie (6) all as of this coming May. Mrs Gaines continues from the testimony video saying that after a few years at home with the children, working her design business from home too, she says ‘God said’ in 2014 it was OK to re-open her store.

I find it curious that God told her to stay home with her first two babies when they were young but that it was OK to become a business woman while the second two were young.

From various interviews within the last year or so, Joanna is quoted as saying,

I really felt like God said, ‘You’re gonna have a platform one day with women.’ (source)

I kind of felt like God just kept saying, ‘This is gonna be something that I’m going to take to another level,’ (source)

But I felt like God said, ‘Hey, this is the season to be home, and you need to trust me.’ (source)

But I felt like God said, ‘If you trust me with your dreams, I’m gonna make Magnolia bigger and better than you could have ever dreamed.’ (source)

So God is great because He gave her a big store. That’s her testimony. Not so much about raising her babies, nor about the blessing of marriage and a husband. Her dream, her store,her things.

The ‘key‘ as Joanna said in the video’s conclusion, is to let God speak to you and “let his father heart say this is what I have for you.” Again, an emphasis on self and the things God will give her, not the blessing of knowing Jesus, of being redeemed from sin’s curse, for escaping wrath, of being made holy in sanctification, for the promise of heaven, for the pleasure of enjoying God forever. Nothing of the sort. Just gratitude that He will “take the store further than she ever imagined.” Continue reading

I Used to Be Transgender. Here’s My Take on Kids Who Think They Are Transgender.
The cult of women’s self-esteem