Churchwatch Central (CWC) begins with this statement: “We know that James White would not preach or tolerate a different Jesus, a different gospel or embrace a different spirit” which was followed by a question. But we’re going to ask the same question in a slightly different manner than CWC’s asked it, so here goes: Why in blue blazes would an acclaimed Christian apologist come out in support of a man who, without apology, promotes and befriends wolves in sheep’s clothing?

In their piece, CWC reveals who some of the wolves are.  One name you’ll recognize from reading our False Teacher Alerts is the Pope of the NAR movement, C. Peter Wagner, who held the lofty title “ICA Presiding Apostle.” After his death last year Che Ahn became his successor. Other names mentioned are self-professed “Super Apostles” Bill Johnson and Rick Joyner, both of whom Dr. Brown endorses. Brown has also gone to bat for soothsayer Jennifer LeClaire, says he approves of the Pied Piper of IHOP-KC Mike Bickle, uber false prophet Jonathan Cahn and a number of others who are just as wolfy as these folks are.

In their must read and share piece, CWC presents the reasons the Body of Christ should be deeply concerned about James White’s approval and support of Michael Brown: 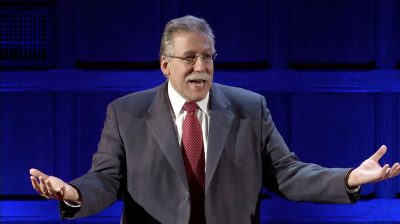 I have a friend, who will see this, who sincerely believes Michael Brown needs to get saved. Now, obviously, I believe Michael Brown IS saved. Unlike most other folks, here’s my line of reasoning:

At this point I have to say, “That covers it–or at least it covered it for the Apostles.” Ah, but wait, someone says, that’s not nearly enough! We need to see if there are any contradictions in there! He’s a charismatic, so he can’t believe in Scriptural sufficiency, for example! I definitely see an issue there—and MB is not ignorant of it, and would reply that he does not believe in continuing *canonical* revelation and would make a distinction in regards to any modern “revelation” and the term “theopneustos.” Do I agree with these distinctions? Nope. Does that give me the right to overthrow the above affirmations? NO.

But, he’s not Reformed! In fact, he claims to be a former Calvinist! That’s surely enough to banish him! If you think only Calvinists are going to heaven, I guess you could conclude that. I don’t, and as much as I believe we honor God by believing all of His truth *consistently,* I find nothing more repulsive than those who wrap themselves in their TRRs (Truly Reformed Robes) and look down on the unwashed masses of non-Reformed, sniff haughtily, and point a bony finger toward perdition and growl, “Off with you to the flames, you non-elect!” MB and I have set a standard, we hope, in honestly addressing these issues in the confines of brotherly commitment to the glory of Christ, the integrity of the gospel, and the inspiration of Scripture.

But…he went on Benny Hinn’s show! Surely that is enough to cast anyone into hell! I wonder if folks think through such statements. I wish MB had not done that—I think maybe sometimes he wishes he had not done that either—but when you stand back and look at the list above and go, “Yep, all that—irrelevant—Hinn is enough,” doesn’t it follow that you just made Hinn more important than everything else in that list? Ever thought of that? Most haven’t.

Unity is, in fact, based upon truth. But it is not based upon walking in lockstep with the narrow vision of one particular group or viewpoint. MB and I are going to be engaging some Black Hebrew Israelites in debate next year, Lord willing. I look forward to it. We might have some disagreements (we don’t view Israel in the same way). But since we will be debating the Trinity, the deity of Christ, etc., we will be on the very same page, just as we were when we were defending the deity of Christ against two unitarians a few years ago. Unlike certain folks, I’ve prayed with Michael L. Brown, and I know his heart for the gospel and missions and our common Lord. So I will continue to debate with him in defense of the truth, and continue to debate him in the pursuit of unity based upon the inspired Scriptures we both love as well.

So you believe he made a mistake with Benny Hinn, Dr White?

What about the others?

Dr Michael Brown might regret going on Benny Hinn but he doesn’t apologize for his ongoing relationships and endorsement of his friends listed above. These aren’t some old endorsements, these are very current validations of these false ministries.

It’s not just these foundational categories – the theology of NAR Apostles like Michael Brown consistently and continually oppose core teachings of the Christian faith including ecclesiology, liturgiology, missiology, eschatology, basileology (study of the kingdom) and so on.

Let’s go through some of the check-list made by Dr White in his post and see if he really wants to embrace Michael Brown as a brother in Christ.  Continue reading

SEE OUR WHITE PAPERS ON DISCERNMENT AND THE NEW APOSTOLIC REFORMATION