Posted By Marsha West on May 19, 2016 in Calvary Chapel, Charismatic, Discernment
Share

Roger Oakland of Understand the Times International begins connecting the dots with the “Jesus Movement” of the ’60s and ’70s.  Was this movement really of the Holy Spirit?  Was God’s “Presence” in the movement?  Or was it another spirit, another gospel and another Jesus?

Dot…Calvary Chapel in Southern California, Pastor Chuck Smith, and a so-called move of God that touched many young people’s lives.

Dot … Lonnie Frisbee, a 60’s hippie who lived in the Haight-Ashbury district of San Francisco and ended up in Southern California where he met Chuck Smith. “Pastor Chuck invited Frisbee to be part of that group and help reach out to the hippies who were on the beaches in S. California. Frisbee’s presence at the church drew thousands of young people to Chuck Smith’s church. Few would argue that Frisbee had a strong influence in and largely symbolized the Southern California Jesus Movement.”

Dot … Frisbee’s emphasis on the “baptism of the Holy Spirit” and supernatural experiences.

Dot … The Pope and Kundalini. 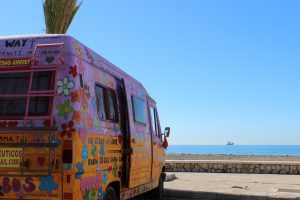 Throughout my life, I have seen God work in many supernatural and natural ways. God is a God of wonders, and there are many times I wonder at the things He does to help me connect the dots in order so I can understand the times.

Someone once said that connecting dots in order to make a meaningful drawing or picture is easy. All one has to do is use a pencil or pen to join one number to another. Now, while this may sound easy, in the confusing world we presently live in, connecting dots is not so simple.

My calling has been to connect dots in order to help believers, and unbelievers, understand what the Bible has to say about the times in which we live. The Bible helps us to understand the past, the present, and the future and is of paramount importance as it is given to us by the inspiration of God for our benefit. For example, we read in 2 Timothy 3:16-17:

All scripture is given by inspiration of God, and is profitable for doctrine, for reproof, for correction, for instruction in righteousness: That the man of God may be perfect, thoroughly furnished unto all good works.

Now, for the point of this commentary. First, let me start with John 6. This is the story of where Jesus miraculously multiplied fish and bread to feed the multitude that had come to hear him preach. Afterward, the men whom he fed said, “This is of a truth that prophet that should come into the world” (vs. 14). The chapter goes on:

When Jesus therefore perceived that they would come and take him by force, to make him a king, he departed again into a mountain himself alone. (vs 15)

Later in the chapter, it explains that the multitude found him and began questioning him as to where he had gone. But rather than answering their question, He brought to their attention the motives of their hearts:

Jesus answered them and said, Verily, verily, I say unto you, Ye seek me, not because ye saw the miracles, but because ye did eat of the loaves, and were filled. (vs. 26)

Jesus had used the miracle of the loaves and fishes to show them that He was God. But they didn’t see that—in essence, they only saw how they benefited from what He had done. They missed the entire point of what God was trying to show them and do in their lives.

Similarly, this happens today in so-called movements of God. It may even be that God has begun to move, but so often man takes over, sees how he can gain from such a move, and now it becomes a movement of man rather than a move of God.

For instance, during the ’60s and ’70s, the “Jesus Movement” was occurring, and thousands of young people (many of them hippies) were coming to the Lord.

I don’t doubt that many of these were true conversions, but I have always wondered if what started out as a move of God in thousands of young people’s hearts across the globe became more of a movement of man where the precedence became more about following men (and sometimes women) than following Jesus Christ. Before you get upset and write me off, please hold your fire and take a moment to check out Scripture. Following anyone or anything other than following the Good Shepherd Jesus Christ is always a mistake.

John the Baptist is a perfect example of someone who was a part of a move of God and determined to keep it that way. Jesus said of him: “Among those that are born of women there is not a greater prophet than John the Baptist: but he that is least in the kingdom of God is greater than he” (Luke 7:28). John the Baptist performed no miracles and healed no one and never drew attention to himself, but many came to hear him preach repentance as he prepared the way for the Messiah. Then when Jesus arrived, he pointed them to the Christ and not himself. His words were, “. . . this my joy therefore is fulfilled. He [Christ] must increase, but I must decrease . . . he that is of the earth is earthly, and speaketh of the earth: he that cometh from heaven is above all” (John 3:29b-31). John would not allow his charisma to get in the way of what God was doing, and what started as a move of God remained a move of God.  Continue reading

Connecting the NAR dots: Gumbel, Brodersen and the Neo-Calvary emergence

2 Responses to Move of God or Movements of Men . . . Connecting the Dots