Posted By Marsha West on December 16, 2016 in Christmas
Share

The question is addressed to all those who profess faith in Jesus Christ.  Albert Mohler, president of Baptist Theological Seminary, penned this piece in 2010. His question requires a yes or no answer; either we believe Mary was a virgin when she was found to be with child through the power of the Holy Spirit, or we choose to reject the narrative found in the gospels and chalk it up, as some do, to a “pious legend.”  Dr. Mohler answers the question…. 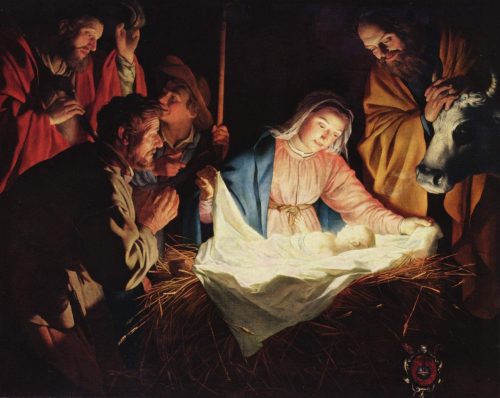 “The Virgin Mary is an interesting prism through which to examine America’s emphasis on faith,” Kristof argues, “because most Biblical scholars regard the evidence for the Virgin Birth … as so shaky that it pretty much has to be a leap of faith.” Here’s a little hint: Anytime you hear a claim about what “most Biblical scholars” believe, check on just who these illustrious scholars really are. In Kristof’s case, he is only concerned about liberal scholars like Hans Kung, whose credentials as a Catholic theologian were revoked by the Vatican.

The list of what Hans Kung does not believe would fill a book [just look at his books!], and citing him as an authority in this area betrays Kristof’s determination to stack the evidence, or his utter ignorance that many theologians and biblical scholars vehemently disagree with Kung. Kung is the anti-Catholic’s favorite Catholic, and that is the real reason he is so loved by the liberal media.

What are we to do with the Virgin Birth? The doctrine was among the first to be questioned and then rejected after the rise of historical criticism and the undermining of biblical authority that inevitably followed. Critics claimed that since the doctrine is taught in “only” two of the four Gospels, it must be elective. The Apostle Paul, they argued, did not mention it in his sermons in Acts, so he must not have believed it. Besides, the liberal critics argued, the doctrine is just so supernatural. Modern heretics like retired Episcopal bishop John Shelby Spong argue that the doctrine was just evidence of the early church’s over-claiming of Christ’s deity. It is, Spong tells us, the “entrance myth” to go with the resurrection, the “exit myth.” If only Spong were a myth.

Now, even some revisionist evangelicals claim that belief in the Virgin Birth is unnecessary. The meaning of the miracle is enduring, they argue, but the historical truth of the doctrine is not really important.

Must one believe in the Virgin Birth to be a Christian? This is not a hard question to answer. It is conceivable that someone might come to Christ and trust Christ as Savior without yet learning that the Bible teaches that Jesus was born of a virgin. A new believer is not yet aware of the full structure of Christian truth. The real question is this: Can a Christian, once aware of the Bible’s teaching, reject the Virgin Birth? The answer must be no.

Nicholas Kristof pointed to his grandfather as a “devout” Presbyterian elder who believed that the Virgin Birth is a “pious legend.” Follow his example, Kristof encourages, and join the modern age. But we must face the hard fact that Kristof’s grandfather denied the faith. This is a very strange and perverse definition of “devout.”  Continue reading

GRACE board releases statement saying they stand with victims of Tullian Tchividjian
Are You Trembling Yet?

22 Responses to Must We Believe the Virgin Birth?