Posted By Marsha West on March 16, 2017 in Discernment, Yoga
Share

Na-ma-stay is the pronunciation. It’s a Hindu salutation that is said at the beginning and end of most yoga classes. Participants place their palms together before the heart, bow their heads, and utter “Namaste,” which means “The divine in me bows to the divine in you.” But wait! We all know professing Christians who participate in yoga classes.  Many of them have been warned that there are spiritual dangers associated with yoga and are not concerned in the least. According to Baptist Theological Seminary president Albert Mohler, who has warned of the spiritual dangers for years, “The bare fact is that yoga is a spiritual discipline by which the adherent is trained to use the body as a vehicle for achieving consciousness of the divine.”

So, should believers avoid yoga altogether?  What about “Christian yoga“?  And what is the association between yoga and Satan? Pam Frost answers these questions in a piece she penned for truthXchange.  Some of what Frost reveals about this Hindu practice is chilling. She writes: 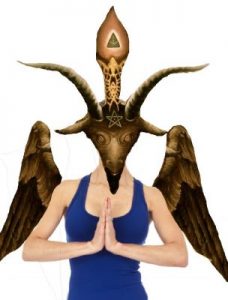 These are surely shocking words to the ears of most yoga enthusiasts, who find the association of yoga with Satan to be both disturbing and incongruous with their own understanding and experience of yoga. Yet, so begins an article announcing yoga classes to be held in the Satanic Temple of Salem, Massachusetts. How could something so widely considered beneficial in every way suddenly be associated with the devil? After all, yoga has achieved status in the West as the seemingly ubiquitous answer for the general well-being of just about everyone—from children in our public schools to the elderly in assisted living, from those with robust health in the prime of their lives to those with terminal illnesses nearing the end of their lives, and everyone in between. Many healthcare professionals recommend yoga for purported benefits such as the increased strength, flexibility and balance attributed to yoga’s postures; for the reduced blood pressure and heart rate attributed to yoga’s breathing techniques; and for the inner peace and global harmony attributed to yoga’s meditative spirituality. Yet, while most acclaim what they believe to be the positive benefits of yoga, William J. Broad, in his New York Times Magazine article How Yoga Can Wreck Your Body, warns that it can actually cause serious physical injuries such as trauma to the back, neck and head, as well as brain injuries and even stroke. But as Christians, we also need to ask whether there could be real spiritual dangers associated with the practice of yoga. We need to understand what the essence of yoga really is.

The word yoga means “to yoke,” and the fundamental goal of its postural, breathing and meditative disciplines is attainment of enlightened consciousness that transcends the Creator/creation distinction until one perceives no distinction between himself/herself and the divine. This is essentially what the serpent placed on offer in the Garden of Eden. The traditional Hindi greeting “Namaste,” which opens and closes most yoga classes, including the one in the Satanic Temple, declares yoga’s quest for enlightenment and immortality through realization of inner divinity. The term actually means, “the divine light in me bows to the divine light in you.” Doubtless, most yoga practitioners are unaware that the familiar term represents a radical collision of worldviews, redefining both the doctrine of God and the doctrine of man as it reduces the divine to an impersonal force in nature and strips man of his dignity as created in the image of the personal Creator.  Continue reading

See our White Paper on Yoga