And people wonder why “Cheetos-eaters living in their mothers’ basements” (discernment bloggers) blog about Christian celebs like Nancy Lee (DeMoss) Wolgemuth!  “Watchbloggers” as we’ve been dubbed, feel that our brethren should know when a Christian leader strays from the truth. And according to Jeff Maples of Pulpit & Pen, DeMoss-Wolgemuth strayed when she began promoting a prayer practice that he believes to be outright witchcraft.  That’s right.  Witchcraft.  Jeff Maples has covered this troubling story.  He writes: 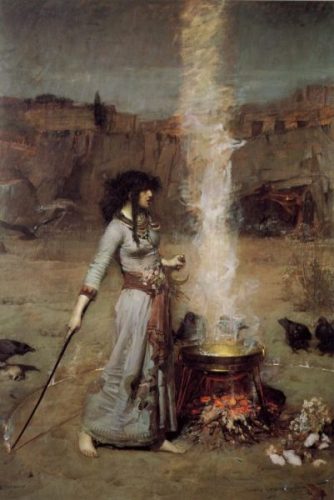 One of the most basic devices used in ancient pagan spirituality is the “circle of protection.” You find it everywhere from the Eastern mystery religions to modern witchcraft. The circle of protection was commonly used in old Gypsy magic, as it was thought to create an impenetrable barrier of protection around those in which it was created.

This “magic” circle, spiritual in nature, could be something physical, such as lines drawn in the dirt or sand, or even a sprinkling of salt. But they could also be imaginary. On page 43 of Gypsy Magic: A Romany Book of Spells, Charms, and Fortune-Telling by Patrinella Cooper, she says

A similar exercise can be done at any time when you are feeling uneasy or before you go to sleep at night. Visualise the blue line of fire. In your mind’s eye, slowly draw its vibrant protective beam around yourself, your bed, or your property. Try to imagine every detail of its path until it finally closes in a protective circle.

Shaheen Miro writes in an article titled The Gypsy’s Tricks for Spiritual Cleansing and Protection: Circle of Protection,

Creating a circular boundary is an ancient form of spiritual protection. The space within the circle becomes consecrated ground. The circle itself becomes a barrier keeping all unwelcomed things at bay.

The use of this protective circle and other forms of witchcraft have been an integral part of Gypsy spiritual life and culture since the earliest foundations. It’s quite common for cultural traditions to be carried over from generation to generation, even when other religions, including Christianity, become an accepted or even prominent expression of spirituality. One famous Gypsy from the late 19th century and early 20th century, named Rodney “Gypsy” Smith, is widely regarded as a great Christian evangelist and revivalist from England. The practice of integrating the Gypsy witchcraft circle of protection into Christianity is widely attributed to Smith. When asked of Smith how to start a revival, he replied:

Find a piece of chalk, and find an empty room. Go into that room and shut the door. Draw a circle on the floor with that chalk, kneel down in that circle, and ask God to start revival right there.

Perhaps the most prominent figure in modern day evangelicalism who promotes the practice of “prayer circles” is Mark Batterson. Batterson attempts to trace his practice of circle-making back to Gypsy Smith. Batterson writes:

The goal of Draw the Circle: The 40-Day Prayer Challenge is to help readers establish a daily prayer habit with a daily dose of prayer inspiration.  It picks up where The Circle Maker left off, with the story of Gypsy Smith. Then it shares new stories and new learnings in prayer that will inspire you to dream big, pray hard, and think long!

In Praying Circles Around The Lives of Your Children I share seven tips, seven circles. They range from praying a hedge of protection around your kids to making prayer lists.  Continue reading

See our White Paper on Occult-Sorcery

What do you think about all this Satan stuff?
Is Kris Vallotton Embracing Anti-Trinitarian Heresy?