Church Watch Central has an exposé on Jesus Camp.  In it, CWC demonstrates the unconscionable way children are indoctrinated into the New Apostolic Reformation cult by leaders such as “Apostle” Becky Fischer. CWC posted a video showing children being brainwashed by this woman that has been blocked.  So Berean Research replaced it with two short Youtube videos that demonstrate the excesses.

Read it and weep… 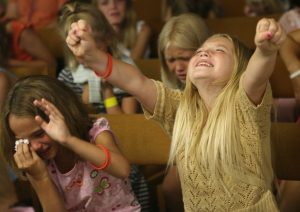 Peter Wagner is recognised as the head of the New Apostolic Reformation (NAR). He has helped define it, form it, defend it, lead it and govern it.

The Hillsong movement and the C3 Church movement from Australia (and the Australian and New Zealand AOG) are apart of the NAR cult. City Harvest Church and New Creation Church from Singapore and Yoido Full Gospel Church from South Korea are part of the NAR cult. The ‘Embassy of God’ is also an NAR cult. All these churches have been exposed for either coverup, sexual abuse, financial scandals, fraud and so on.

The propaganda arm of the NAR are the TBN network, the CBN network, the CharismaMag, Charisma News and many other so-called Christian publishing houses or “Christian” channels. So it is worth any government or media organisation to pay attention to the dangers these cults are pushing on their cities, states or nations under the guise of Christianity. The results of these dangerous doctrines are horrific.

May the below video warn you what the nuts look like in this movement.

A HORRIFIC EXAMPLE OF THE NAR: JESUS CAMP

Here is an example of an NAR indoctrinating youth: Apostle Becky Fischer’s ‘Kids in Ministry International’.

When watching the film, it is the LANGUAGE, DOCTRINE, PRACTICES, REACTIONS, BEHAVIOUR and ASSOCIATIONS that proves Becky Fischer was influenced by the NARpostolic/Prophetic teachings of Peter Wagner, Ted Haggard (Wagner’s pastor), Chuck Pierce, Jack Hayford, John Whimber, Lou Engle and many other popular NARpostles through out the NAR’s history.

(If you are not familiar with the language and doctrines, the NAR peddle doctrine’s such as “Joels Army”, “New Breed” theology, the “seven mountain mandate”, the “new wine-skin”doctrine.)

REACTIONS TO THE FILM

The film accurately represents the brainwashing that the New Apostolic Reformation performs on people and younger generations: the NAR do not reflect Evangelicalism. So this film ACCURATELY captured the ministries of Ted Haggard and Peter Wagner.

Becky Fischer’s own reaction to the documentary on her ministry is interesting.

This observation is true.

Fischer also claimed that, “They’re accusing me of raising a Christian jihad.”

According to the Al Jazeera, the NAR is “America’s own Taliban” (The taliban is an Islamic fundamentalist political movement in Afghanistan currently waging jihad within that country). And Al Jazeera would know considering they are very familiar with what the Taliban is and how jihads work. In fact, NARpostle Peter Wagner himself is proud of the fact that the NAR is the fastest growing religion in the world and considers it is rivaling the growth of Islam.

Our reaction to the Jesus Film?

This is the result of the church not dealing with the NAR cult. And as soon as Christianity speaks against the types of churches we monitor, the sooner this nonsense can be stamped out for the sake of integrity in Jesus name.  Continue reading

NAR “prophet” Todd Bentley admits being possessed by 25 demons–Facebook video..scroll down, left side of the page.

See our White Paper on the DANGEROUS New Apostolic Reformation