Posted By Marsha West on January 8, 2016 in Roman Catholicism
Share

News Alert from Understand the Times

In first prayer video, Pope stresses interfaith unity: ‘We are all children of God’ 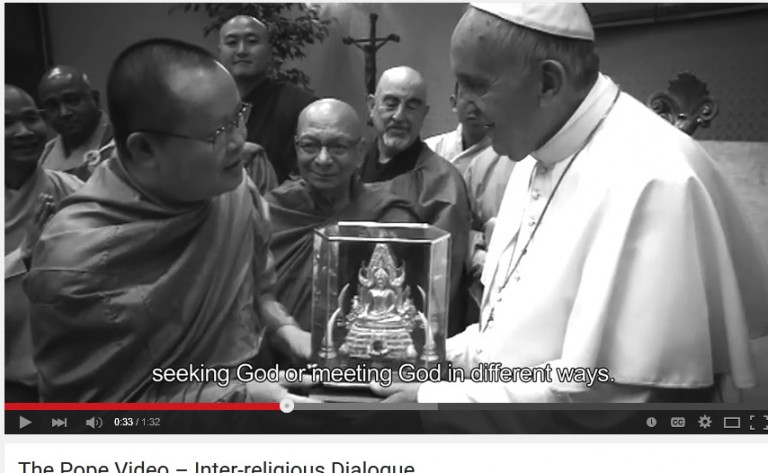 The Pope’s first-ever video message on his monthly prayer intentions was released Tuesday,Watch Video on You Tube [see below] highlighting the importance of interreligious dialogue and the beliefs different faith traditions hold in common, such as the figure of God and love.

“Many think differently, feel differently, seeking God or meeting God in different ways. In this crowd, in this range of religions, there is only one certainty that we have for all: we are all children of God,” Pope Francis said in his message, released Jan. 6, the feast of the Epiphany.

At the beginning of the video, a minute-and-a-half long, the Pope cites the fact that the majority of the earth’s inhabitants profess some sort of religious belief. This, he said, “should lead to a dialogue among religions. We should not stop praying for it and collaborating with those who think differently.” The video goes on to feature representatives of Buddhism, Christianity, Islam and Judaism, who proclaim their respective beliefs in God, Jesus Christ, Allah and Buddha. Click here to continue reading. (* Note Daniel Goldman in video, a mystic and author of The Meditative Mind.)

Related: NEW BOOKLET TRACT: Rick Warren’s Dangerous Ecumenical Pathway to Rome And How One Interview Revealed So Much