Posted By Marsha West on June 1, 2015 in Homosexual Agenda
Share

What is surprising here is not that Elton John is named “father” and David Furnish is named “mother” on their children’s birth certificates.  It’s that Germaine Greer, who was a major promoter of women’s liberation in the 70’s, would have a problem with it.  Seems she’s a bit worried that the motherhood concept has been deconstructed. Greer complained: “Sir Elton John and his ‘wife’ David Furnish have entered on the birth certificate of their two sons that David Furnish is the mother. I’m sorry. That will give you an idea of how the concept of motherhood has emptied out. It’s gone. It’s been deconstructed.”

What this shows us is that 5 decades ago radical feminists like Greer could not conceive of the slippery slope they were creating.

This report via Daily Mail: 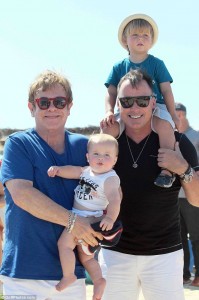 Germaine Greer has criticised gay parents Elton John and David Furnish for listing a man as the mother on the birth certificates of their two sons.

She said the move was an example of how the concept of motherhood has ‘been deconstructed’ – before going on to criticise the process of IVF.

Sir Elton is listed as the father and Furnish as the mother on the documents for their sons Zachary, four, and Elijah, two.

Both children were born to the same California-based surrogate mother – who the couple said they love ‘like a sister’ – and both share the same anonymous egg donor.

She is the latest celebrity to voice disapproval of Sir Elton, 68, and Furnish, 52.

The singer hit back at the comments made by Dolce to an Italian magazine and called for a boycott of the fashion house.

Sir Elton said: ‘How dare you refer to my beautiful children as ‘synthetic’. And shame on you for wagging your judgemental little fingers at IVF – a miracle that has allowed legions of loving people, both straight and gay, to fulfil their dream of having children.’

Speaking at the Hay Festival, 76-year-old Miss Greer said: ‘Sometimes I think that really the problem is the concept of motherhood, which we can’t give any real structure to.