You’ll want to remember how certain esteemed Christian leaders introduced the evangelical community to contemplative prayer (CP), also referred to as centering prayer, breath prayer, meditation and listening prayer.  Why is this important to remember?  For the reason that CP is steeped in Roman Catholic mysticism and is highly unbiblical. Yet Christian celebs such as Richard Foster and Beth Moore urge their followers to adopt a dangerous practice that takes the practitioner into an altered state of consciousness. In this piece, Lighthouse Trails reveals the names of several other wolves in sheep’s clothing and provides reasons we must flee from these people: 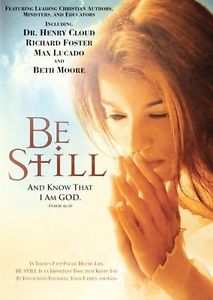 In 2006, a DVD film was released by Fox Entertainment called Be Still. Lighthouse Trails wrote extensively about it at the time, warning our readers that the DVD was an infomercial for contemplative prayer. Recently, a caller who very much understood the deceptive dynamics of the contemplative prayer (i.e., Spiritual Formation) movement, reminded us about the film, and we e-mailed her a copy of all the transcripts (we had transcribed the entire film in 2006). The film includes Richard Foster, Buddhist-sympathizer Catholic convert Peter Kreeft, Dallas Willard, Beth Moore, Priscilla Shirer, Michelle McKinney Hammon, Max Lucado, and Calvin Miller. You can read some of our previous coverage here.

You can be sure that in the last 10 years since Be Still was released, the contemplative prayer movement has grown by leaps and bounds, and we have no doubt that this film has had a lot to do with this spread.

Below we have posted portions of the transcript from three of the segments (there were six altogether) of the Be Still film. You may need to read between the lines to understand the message that is being promoted because the film was  a seductive and enticing infomercial to draw people into the practice of contemplative prayer without coming right out and saying what contemplative prayer really entails. (After all, viewers could get specific instructions later by reading the writings of these people in the film). For those not familiar with the contemplative prayer movement, it may be a good idea to read this article by Lynn Pratt, “So You Want to Practice Contemplative Prayer? What’s Wrong With That?”

Within these quotes, the italicized words are added by LT for emphasis.

“Contemplative Prayer: The Divine Romance Between God and Man”

We live in  frenzied chaotic world under a constant siege of business and noise. The weapons of mass distraction are everywhere. We are bombarded by millions of advertisements daily. The Christian community is not exempt. We were designed to experience fullness of joy, yet many only experience fullness of schedule. Where can we go to find rest and peace?

Be still and know that I am God. We find peace in God’s presence. We get to know God better through prayer. Prayer is relationship and two-way communication with God. Jesus came that we might have life and have it more abundantly. But how can we experience abundance if we don’t learn to slow down? We need to stop and quiet ourselves to spend time in real relationship with God.

Contemplation is different from other types of Christian prayer. Contemplative prayer involves less telling God what we want to happen in our lives and more listening for God’s call to us in our heart through Scripture. As we develop the inward attentiveness to God’s divine whisper, we begin to experience His presence more throughout the day.

“What is Contemplative Prayer?”

[French Catholic mystic] Nicholas Grou said, “O Divine Master, teach me this mute language which says so much.” That’s the idea. It’s very simple, isn’t it? That we become attentive to God. God’s interested in us, what we have to say. We learn to become interested  in what God has to say to us.

Priscilla Shirer, author of “He Speaks to Me: Preparing to Hear the Voice of Go”:

Most of my prayer time is filled up with what I’m saying to Him, as opposed to just being quiet and actually giving him an opportunity to speak to me. And of course I’ve thought about hearing the voice of God all my life, and I’ve thought about wanting to hear Him, but it never occurred to me that I needed to consciously go into His presence with my mouth closed, giving Him an opportunity to get a word in edgewise.  And so I’ve just begun in my prayer life over the past year of my life to make a conscious effort to be in a time of prayer, and yes, to speak to Him, but to consciously say, okay, I’m done talking now, because I’m just gonna sit here in the stillness and wait to see what it is that you want to say to me.

See our White Papers on Contemplative Prayer, Spiritual Formation and Roman Catholicism, plus there are many other topics of interest on the right side of the page.