Before you get started on Bud Ahlheim’s blog post, head over to our White Paper on Rick Warren, quickly browse our list of concerns, then return to Bud’s piece because you’ll want to know what this man is currently up to.

Because Rick Warren has been dubbed “America’s Pastor” and is held in high esteem by the clueless media as well as pastors who have bought into the purpose-driven model of doing church, it’s important to follow his career path. Since Berean Research makes an effort to closely monitor his comings and goings, we can report without reservation that “America’s Pastor” is not only a wolf in sheep’s clothing; he’s a leader of the pack.  Too harsh, you say?  Again, take a glimpse at our research, and then come back to Bud Ahlheim’s must read report…. 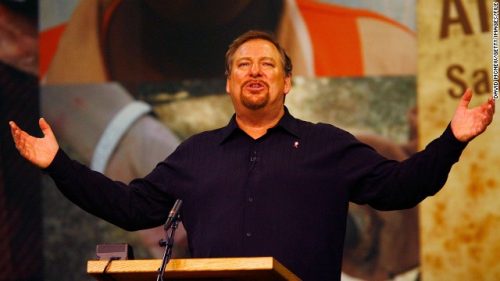 Remember how Jesus, when He came to earth as the Incarnate Son Of God, actually became a vile, depraved sinner so that He could adequately reach sinners in a relevant way with His Truth? Or that time the thrice-denying Peter answered Jesus’ thrice-offered query, “Do you love me?” in the negative, but only so he could do effective ministry among Jews who didn’t love Jesus either?  Or how about that story of the post-Damascus Road Paul who decided to forsake his apostolic calling and return to living as a self-righteous pagan so that he could reach pagans with the Gospel?

Don’t recall any of these things?  Hopefully, you don’t. I certainly don’t. But according to the “pastor” of the purpose gospel, Rick Warren, it’s this sort of Scripture-denying, command-disobeying tact believers must take in witnessing for the goal of church growth. The mega-church, mega-pastor – who obviously doesn’t focus on being “Mega-Scriptural” – touted this in a recent Pastors.com article, How To Understand How Unbelievers Think.

This stellar example of Biblical obtuseness on the part of Warren comes only days after the “quick, delete that” Tweet by his doctrinally-inept Saddleback Church.

Nice, huh? Just the perfect message to appeal to the post-modern, feelings first, experience seeking, “who are you to judge” mindset.   It’s the ideal sort of seeker-friendly message that might bring in pagan crowds, and just in time for Easter, too.  Surely they’ll think, “Wow! A church that doesn’t focus on ‘theology’ but is interested in ministry first! And you know what ‘ministry’ means? It means it’s all about me!   It should really be called “Minister-ME!’   And, just like Saddleback says, it’s what Jesus did! Yaaay!”

13 Responses to Rick Warren: Thinking Like A Pagan & A Theology-dissing Jesus