Sandy Simpson of Deception In The Church has written a commentary on the 430,000-square-foot Museum of the Bible in Washington DC. Simpson has some serious concerns about some the museum’s board members, including false teacher Rick Warren. And he presents plenty of evidence to back up his concerns. He writes: 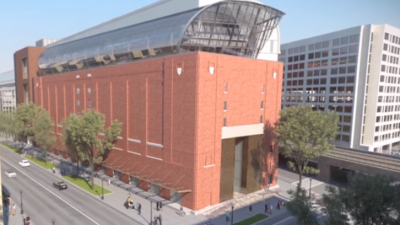 The Museum of the Bible in Washington DC

Let me start out by stating that I am all in favor of a museum that shows the historicity of the Bible.  If it weren’t for some of the people involved this would be a valuable resource.  But I don’t support giving credibility to Rick Warren and his friends in support of the Museum of the Bible.  Warren has become the de facto spokesman for this effort.  It is great they are featuring texts and archeological information about the Bible.  But I believe Warren is doing this to set himself up as an authority on the Bible when he is actually guilty, on many counts, of not only disobeying it but of twisting it out of all recognition.  False teachers and those who hang with them are constantly on the lookout for projects that will legitimize them and make them look like they are biblical leaders in Christendom people should follow.  But true biblical leaders are those who do not teach heresy and do not stand up for false prophesies.  Though the Museum of the Bible could do a world of good for those lacking an understanding of the Bible and its place in history, it is also propping up some questionable “Christians” who are behind it and those compromisers who stand with them.

A little history on Warren

Rick Warren supports and profits from an unbiblical church growth methodology he got from his mentor C. Peter Wagner, as well as unsound advice in his books.  His P.E.A.C.E. plan was a lie where he claimed Saddleback and associates were going to “solve” a number of issues like hunger, lack of education, disease, etc.  He has repeatedly been disingenuous about the popularity of his books, presented his church growth tactics to Catholics, Mormons, Jews, etc., used the demonically inspired ideas of Carl Jung as one basis for his church growth methodology, removed his statement of faith (such as it was) from the Saddleback site when it came under attack, supports Catholics and Protestants together movements, called for Muslims, Jews and Christians to stand together in their “Abrahamic faiths” and claims we all pray to the same “God”, worked with globalist Tony Blair and supported him for a “peace prize”, basically supports the concept of “Chrislam” (the attempt to meld together Christianity and Islam), continues to work with Catholics and the pope on a number of issues also stating “We all love Jesus Christ”, has spoken at a papal mass, and so forth.

Following are a just a few of the articles exposing Rick Warren followed by an expose on other participants such as Mary E. Banks and her husband Melvin who are on the teaching team of Joel Osteen’s church:

Niche Marketing, Audience-Driven, Full Service Churches: How We Got Here? by Orrel Steinkamp, The Plumbline, Volume 8, No. 1, January/February 2003
Proponents of Willow-Creek Seeker Sensitive evangelism and the wider public have little knowledge of the historical genealogy of this movement.  Most simply assume that George Barna and associates originated the marketing model now employed widely in seeker sensitive evangelism.  Barna, however, is a late-comer, who actually adapted and expanded ideas that had been earlier discovered by Robert Schuller.

The Market-Driven Church by Gary Gilley, 6/00
While we will examine the writing of various individuals who speak for the market-driven movement, we will focus often on the two flagship churches: Saddleback Valley Community Church in Orange County, California, and Willow Creek Community Church near Chicago. These churches serve as the models that are reshaping the way we “do church” today. As a matter of fact, many refer to these churches and their clones as “new paradigm churches.” Churches all over the world, even those who would claim to reject the church growth movement, are imitating the many methods promoted by Saddleback and the “Creekers.” Others have written about church growth, but these two churches have made it work, and for their success they are idolized and adored by the modern evangelical community. Read Part 1, Part 2, Part 3, and Part 4.

The Purpose Driven Life – An Evaluation by Gary Gilley, 11/03
A two-part evaluation of the popular book by Rick Warren.  Read Part 1, and Part 2.

Critique of the “Seeker-Sensitive, Purpose-Driven” Church Method by Pastor Dan Norcini, Copyright 1999 Sovereign Grace Bible Church
These early Christians knew what to expect for confessing Jesus Christ before men. They knew the price they paid would be dear but they possessed something which made all of their tribulations seem light and momentary (2Cor 4:17) genuine faith working through genuinely fervent love for the person of Jesus, who had loved them and given Himself for them. Can the same be said of any of the converts of this system? Time and the providence of God will tell. 10 part series.

The Church Growth Movement – An Analysis of Rick Warren’s “Purpose Driven” Church Growth Strategy by by Dennis Costella, FOUNDATION Magazine, March-April 1998
AFTER PERSONALLY covering the Saddleback Community Church “Building a Purpose-Driven Church” seminar held in Southern California this past January, it became clear to me that some of today’s most influential religious leaders misunderstand and misrepresent the true purpose of the church today.

The Book of Numbers – Rick Warren’s purpose-driven attack on American Christianity by Chris Lehmann, MSN Culturebox, Posted Monday, March 17, 2003, at 11:33 AM PT
This, rather than the abundance of marketing techniques and showman gimmicks that inflect Warren’s style of self-presentation, is the most troubling feature of Warren’s purpose-driven approach. It has historically been the nature of the Christian God to be something of an unstinting task master. Warren’s God “wants to be your best friend.” And this means, in turn, that God’s most daunting property, the exercise of eternal judgment, is strategically downsized. When Warren turns his utility-minded feel-speak upon the symbolic iconography of the faith, the results are offensively bathetic: “When Jesus stretched his arms wide on the cross, he was saying, ‘I love you this much.’ ” But God needs to be at a greater remove than a group hug. Surely we lose something if we apprehend the Bible, and the language of faith, as little more than a lesson book. “If you’re not preaching life application,” Warren has told one interviewer, “you’re not really preaching.” Yet if you’re only believing in life application, what are you really believing?

Simpson includes a few more articles on Rick Warren and then has some facts on the other Museum of the Bible board members, as well as details on the Green family.  Continue reading

Resolutions: 6 Ways God Could Sanctify You in the New Year
The hidden pitfall of Bill Johnson’s ‘Red Letter Revival’