Some readers may not be aware that Sen. Marco Rubio is a Roman Catholic.  The RCC claims to be the one true church. Berean Research respectfully disagrees, as we believe that the doctrines taught by the RCC are in opposition to biblical Christianity. That said, Sen. Rubio has gone against the powerful gay lobby in his opposition to same sex “marriage.” For that we applaud him.

Over at The Hill: 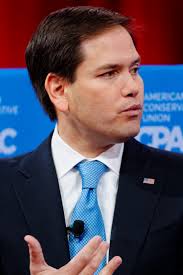 Christianity is facing a “real and present danger” in the United States due to growing acceptance for gay marriage, Republican presidential hopeful Sen. Marco Rubio said.

“We are at the water’s edge of the argument that mainstream Christian teaching is hate speech. Because today, we’ve reached the point in our society where, if you do not support same-sex marriage, you are labeled a homophobe and a hater,” the Florida Republican told CBN News.

Rubio said the “next step is to argue that the teachings of mainstream Christianity, the catechism of the Catholic Church, is hate speech, and that’s a real and present danger.”

The comments are the latest in a series of remarks on gay marriage that have put the presidential contender under the media spotlight.

Rubio said earlier this year, also during an interview with CBN News, that it’s “ridiculous and absurd” to believe that there is a constitutional right to same-sex marriage.

Those remarks came ahead of the Supreme Court hearing oral arguments in a case that could lead to same-sex couples being able to marry in all 50 states.

He added in his earlier interview that his stance against same-sex marriage “is not a policy against anyone.”

Rubio’s opposition to gay marriage puts him at odds with a majority of Americans ahead of the 2016 presidential election, but in line with the Republican Party.

Fifty-eight percent of Americans support same-sex marriage, according to a Quinnipiac University Poll released earlier this year, but 59 percent of Republicans are opposed to it.