Posted By Marsha West on November 10, 2017 in Discernment, Occult
Share

I’m adding this piece by Michelle Goldberg to Berean Research’s ever growing list of White Paper articles on Occult – Sorcery. According to Goldberg, people’s interest in organized religion is waning while occultism, i.e. witchcraft and astrology, is becoming normalized, especially among millennials. What she finds interesting is that more and more people are using occult practices to deal with their woes. “When traditional institutions and beliefs collapse and people are caught between cultural despair and cosmic hopes, they often turn to magic.” And when people are in a state of despair during times of social crisis, occultism gains currency, says Goldberg.  She goes on to say that today’s social crisis has a growing number of people embracing new forms of mysticism, especially those who see the election of Donald J. Trump as a calamity. In other words, liberals.

In my intro to More students, young Americans turn to paganism I explained what witches believe:

those who practice witchcraft (Wicca) have “monistic and pantheistic beliefs that all living things are of equal value. … Humans have no special place, nor are they made in God’s image. … Wiccans believe that they possess divine power within themselves and that they are gods and goddesses. …Consciousness can and should be altered through rite and ritual.”

Therefore, Christians must flee from any sort of pagan practice. Deuteronomy 18:10-14

Goldberg’s piece is published over at the liberal New York Times: 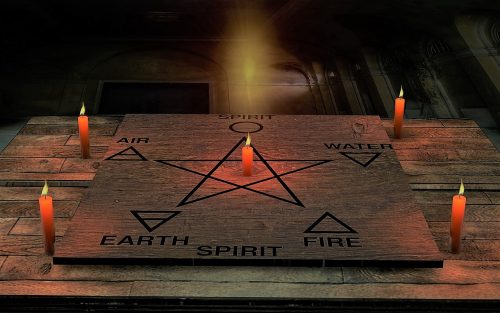 On a Wednesday evening last week, I sat in on a class called “Witchcraft 101: Curses, Hexes and Jinxes,” at Catland, a fashionable occult boutique in Bushwick, Brooklyn. More than a dozen people, most of them young women, sat in folding chairs in the store’s black-walled event space. The instructor was one of Catland’s co-owners, Dakota Bracciale, a charismatic, foul-mouthed 28-year-old former M.A.C. makeup artist dressed in flowing black, with a beard and long, lavender nails.

“If you’re not ready to admit that the universe is chaos, I’m not sure how far you’re going to go,” Bracciale said to the class, describing witchcraft as a way to exercise power in a world without transcendent moral rules, a supernatural technology for taking care of yourself when no one else will. Witchcraft, Bracciale said, lets you be the “arbiter of your own justice.”

I suspect that this assumption of chaos — the sense that institutions have failed and no one is in charge — helps explain the well-documented of occultism among millennials. Attempts at spell-casting are obviously not unique to today’s young people; the Washington writer and hostess Sally Quinn just published a book in which she boasts about hexing the renowned magazine editor Clay Felker, my former journalism professor, before his death from cancer. Still, magic and witchcraft have a renewed cachet, one that seems related to our current climate of political and cultural breakdown.

“Witches are everywhere these days,” says the introduction to “Basic Witches,” a cheeky how-to book about witchcraft published in August. At Catland, along with candles, pheasant feet and little jars of mouse bones, you can buy the beautifully produced feminist witchcraft magazine, whose covers feature black-and-white photos of gorgeous girls looking like pensive pop stars. There are a surprising number of magical paraphernalia subscription boxes. “Why the Witch Is the Pop-Culture Heroine We Need Right Now,” said the headline of a recent piece on New York Magazine’s Vulture site, part of its Witch Week Halloween series.

Some of this vogue is about witch-as-metaphor, an icon that captures the boiling rage and determined independence of legions of nasty women. But some of it is a real, if eclectic, spiritual practice, adopted by people skeptical of organized religion but unfulfilled by atheism. It’s these sincere attempts to use magic that interest me, because occultism often gains currency during times of social crisis.  Continue reading

Why millennials are ditching religion for witchcraft and astrology

CHECK OUT OUR WHITE PAPER ON OCCULT – SORCERY

Christians, We Need To Talk About Hollywood
What Do I See? False Prophets Everywhere — Not a Lucid Word to Spare