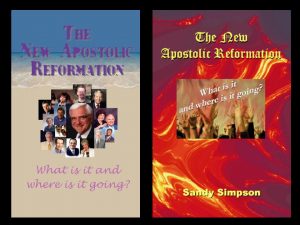 To fully understand the New Apostolic Reformation and  the reasons it is a dangerous movement, we are posting an article written a few years ago by Herescope (Discernment Research Group) that covers all the bases. Bible believing Christians must take this seriously. Moreover, they must understand the inner workings of this movement for the reason that, “You will recognize them by their fruit.” (Mat. 7:16)

After reading this article, if you find yourself involved in this movement in any way shape or form, you must break free from it — now!  No dilly-dallying.  For some of you, breaking free will be difficult for all sorts of reasons; however, you have no choice because to choose heresy over Truth always results in spiritual darkness.

We urge you to send Sarah Leslie’s blog post to everyone you know. 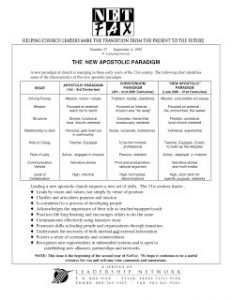 Post-denominational churches. The next church. New paradigm churches. They are all names that have been used to describe a new kind of church that is emerging at the close of the twentieth century and the dawn of the third millennium. The current reformation underway is not so much a reformation of faith as it is one of practice, not so much against apostasy as it is against irrelevance in a warp speed culture.

Missiologist/researcher/author C. Peter Wagner has adopted the term, New Apostolic Reformation, to characterize this movement of God that is reshaping Protestant Christianity in the US and around the world. His new book, Churchquake!, to be released in March, seeks to identify the dynamics of this movement and chronicle the distinguishing characteristics of this new wineskin. We thank Wagner and his publisher, Regal Press, for their permission to print excerpts in this issue of NEXT. – Leadership Network, NEXT, Vol 5, No 1, Jan-Mar 1999

Peter Wagner issued a letter late last week that discusses the recent controversy about the New Apostolic Reformation (NAR) and International House of Prayer (IHOP) in the media and the American political scene.

Wagner’s letter, titled “THE NEW APOSTOLIC REFORMATION: An Update” was issued for the apparent purpose of doing damage control over the recent characterization of the NAR as a Dominionist cult, especially in the mainstream press. Recent public attention in the media has shed light on his entire NAR empire, and his letter indicates that he is very concerned about their image. He begins his letter with the sentence, “Surprisingly, the New Apostolic Reformation (NAR) has recently become a topic of discussion in the political media.”

Surprisingly? But what else could he expect? His group of self-appointed, self-anointed apostles and prophets, which has grown and thrived under the radar for over a decade in charismatic circles, has within the past year and a half come out as a key player in American Religious Right politics, beginning with the extraordinary May Day prayer event at the Lincoln Memorial in Washington, D.C. on May 1, 2010. We wrote about it in a series of articles at the time, here, here, here and here at the time.

Since that time many of the leaders of the IHOP and NAR movements have deftly moved out of the closet and into direct political action. And these apostles and prophets are now fully supported by a second tier of leading media moguls in the evangelical world, including the influential Family Research Council and the American Family Association. Everything changed when Texas Governor Rick Perry, now a presidential candidate, began associating himself with the NAR at his public prayer rally, “The Response” held on August 6th. We published many articles voicing concern about this situation. Why were we concerned? It wasn’t about the politics of the situation. It was about the strange and aberrant doctrines and practices of this formerly obscure cult, which has now suddenly propelled itself onto a front and center national stage, and which has religious and political goals that are totally antithetical to biblical Christianity. We wrote:

In his letter, Wagner denies that the NAR is a cult, and claims that the NAR represents no doctrinal change. However, this statement is preposterous in light of his extensive public record of working on a new apostolic “paradigm” for both church structure and theology. He goes so far as to claim, “The NAR is not an organization,” even though he has headed up the crucial networking elements that form its power base from the very beginning. Much of the factual details are documented very well at Sandy Simpson’s Deception In The Church website, which has chronicled Wagner’s activities for the past several decades, e.g. here, here, here and here. The truth is that Wagner’s apostolic structure, which positions apostles and prophets in a hierarchical downline network over individuals, groups and organizations, represents both a major doctrinal change and a structural change.

Technically, the NAR may not be an organization, but it is a network. And as such, this network has, by stealth and cunning, superimposed itself on top of nearly every existing denominational structure in the country. This aggressive networking has set up entirely new avenues of authority and accountability, until existing structures and theologies have been compromised and eroded, or completely taken over by the NAR and/or one of its related networks. And through its Dominionist goals, the NAR hopes that its network can superimpose itself over existing community, cultural and governmental structures across the land, which is referred to as the Seven Mountains.

Several years ago we ran a series of Herescope posts about Wagner’s NAR networking structure — a series which explains how his networking empire was built, and the theology behind it:

At the time of this series we wrote explanations like these:

This new church structure is based on a revolutionary interpretation of the “five-fold ministries” (Ephesians 2:20-21; 4:11-13) based upon the esoteric doctrines of the Latter Rain/Manifest Sons of God cult. In this evolutionary twist, the Church (as an organic whole) needs to come into full “maturity” by restructuring itself into networking cells that are governed by apostles and prophets. It is claimed that this will “activate” the Church to become fully operational as a body on Earth, unified to fulfill its manifest destiny (fulfill the Great Commission) — a global army that heralds the return of “Christ.”

A core heresy of the New Apostolic Reformation is that the Church must “incarnate” Christ; i.e., become deified through this restructuring process. A corollary to this doctrine creates the dominionism mandate whereby the church is empowered to act as agents of Christ on earth, crushing His enemies and building His Kingdom.

C. Peter Wagner has served as a one-man public relations firm for the widespread propagation of the new doctrines associated with the apostolic networks. In the latter half of the 1990s, key conferences were held in which he laid the groundwork for the creation of these apostolic networks. He constantly refined and re-defined the doctrines as he went along (sometimes very publicly); and has written numerous books on the topic, and introductions for books by other authors.

Another curious facet of C. Peter Wagner’s recent letter, is that he re-wrote some of his own history. In this letter he said:

If I was going to write about this phenomenal move of the Holy Spirit, I knew I had to give it a name. I tried “Postdenominational” but soon dropped it because of the objections of many of my friends who were denominational executives. Then, in 1994, I tested “New Apostolic Reformation.”

However, he gives a different history in his 1999 book Churchquake! which launched his New Apostolic Reformation. On page 35 he explains:

The first time I saw the term “apostolic” used in this context was in an issue of NetFax published by the Leadership Network of Tyler, Texas, on September 4, 1995. It spoke of “The New Apostolic Paradigm.” I filed it only because I was experimenting with another name at the time.

We have included at the top of this post a copy of this issue of NetFax by Leadership Network as Exhibit 1. This one-pager provides evidence that there was experimentation with the whole concept of a downline networking apostolic structure. But it is a year later than Wagner asserts he did his own testing of the term. So how could Wagner be testing the term “apostolic” if he didn’t hear about it until he read this issue ofNetFax? There is probably some very interesting history behind the scenes here. Regardless of what really happened, the Leadership Network organization was already working on the same concepts that would become part and parcel of the New Apostolic Reformation, and it has now become one of the biggest purveyors of Dominionism’s social gospel (“missional,” “cultural renewal,” “kingdom gospel,” etc.) through its Emergent empire, its megachurch empire, and its connection with the  NAR.

Finally, Wagner’s letter denies his more extreme views on Dominionism, especially those views that have come to be associated with the Seven Mountains. Yet, as our blog has reported here, it was C. Peter Wagner and Os Hillman (who, incidentally, also issued a letterdownplaying Dominionism this week — ironically posted at his www.reclaim7mountains.com website!) who launched Lance Wallnau on the dog-and-pony-show for Dominionism around the country. Notably, C. Peter Wagner, while citing his mainstream credentials in his letter, neglects to mention that he is also the author of a key book on the topic, aptly titled Dominion! How Kingdom Action Can Change the World, which he published in 2008.

There is much more that could be said and written about this letter by Wagner. Much documentation on Wagner and his NAR Dominionism has been published on this blog since 2005 and the Discernment Ministries website, which has newsletters dating back several decades on this topic.

We are continually grieved over C. Peter Wagner – what he has written and what he has said, how he has changed the landscape of Christianity with his marketing tools, warfare rituals, networks and leaders. When and how did he fall prey to a doctrine that teaches that Jesus did not defeat Satan at the cross? When was he beguiled through subtilty so that his mind became corrupted from the simplicity that is in Christ? (2 Cor. 11:3) When did he leave the humble simple Gospel of Jesus Christ and His grace? How is it that anyone could believe that it is a good thing for a church to sit upon seven mountains?! (Rev. 17:9) We urge our readers to pray for this man. And with all sincerity and earnestness we plead with Dr. Wagner to repent and turn again to the truth of the Gospel.

Hillsong: Houston IS The Problem
“Dream Destiny” is code for “Another (NAR) Gospel”

2 Responses to Shedding light on the diabolical NAR empire