Spiritual Formation….Contemplative/Centering/Apopathic/Breath Prayer….”Christian Yoga“….Enneagram (you’ll learn about this below) are terms Bible believing evangelicals must become familiar with. All of these practices have been introduced into mainstream evangelicalism. Where do they come from? You don’t have to dig very deep to discover that practices such as these are rooted in Eastern mysticism. In other words, neo-paganism. What’s concerning is that nearly everyone dabbles in some form of mysticism (occult knowledge). Even the Church is entrenched in “Christian” mysticism (much of it borrowed from Roman Catholicism) and they don’t even know it. However, many professing believers do know. They’ve heard the warnings and continue down the neo-pagan path that leads to death. Why? Because having to give up things we enjoy is hard!  And besides, God understands….right?

But what if He doesn’t? What if He actually meant business when He commanded the Jews not to learn to follow the abominable ways of pagan nations (Deut 18:9).  Some of the pagan practices we’ve learned in the Church include yoga and Eastern-style meditation (altered states of consciousness), i.e. Contemplative Prayer.

What this boils down to is that the visible Church is teaming with biblically challenged Christians, those who rarely read and study the Bible.  So how can they possibly know what God says?  They can’t and they don’t. Paul has some advice for believers such as these: “Do your best to present yourself to God as one approved, a worker who has no need to be ashamed, rightly handling [accurately or correctly explaining] the word of truth.” (2 Tim 2:15) The word of truth is the Bible aka God’s Word.

Over at Midwest Christian Outreach, husband and wife team Don and Joy Venoit have written a piece that is chock full of information to help those who profess Christ make choices that will lead to a biblical worldview.  They write: 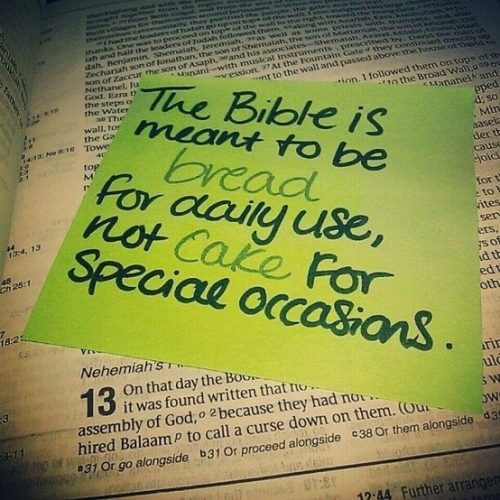 All Scripture is breathed out by God and profitable for teaching, for reproof, for correction, and for training in righteousness, 2 Tim 3:16 Photo credit: Living Simply In Abundance

Writing to the Colossians in the First Century, the Apostle Paul warned about certain spiritual disciplines that had “the appearance of wisdom” (Colossians. 2:23) but, in fact, conflicted with sound biblical teaching and were very harmful to the Christian life. False teachers were in this case Gnostics, who crept into the church and claimed special “spiritual knowledge.” They gained influence in the church because what they were teaching felt “right” and “good” and oh so “spiritual” to the unwary, appealing as they did (and do) to the old fallen nature, which Christians still carry and must struggle against. False teachings of all types are guaranteed to appeal to our old sin nature. Gnosticism caused much damage to the early church, and quite a bit of the New Testament was written to dispel this egregious error.

Jude addresses a similar problem in his epistle as he writes of false teachers (Gnostics) who had “crept in unnoticed” (Jude 4). The Apostle John addresses the issue in his First Epistle as well at the beginning of his Gospel. The Apostle Paul had warned the Ephesian elders not only to be on the alert for false teachers (usually traveling teachers) who would sneak in from the outside but also to watch out for false teachers who would arise from within the congregation. (Acts 20:28-31) The problem didn’t fade out in the First Century. False teachings and false teachers have been with the church down through the ages and are, in fact, rampaging through the church today.

In recent years, there has been less sound biblical teaching in the church as a whole, and we have witnessed the introduction of and emphasis on mystical spiritual disciplines through “Contemplative Prayer.” Much of the Contemplative Prayer Movement goes back to and draws from Roman Catholic mystics (the Desert Fathers ) who were hermits and ascetics – the very practices Paul warned against in Colossians. One of the luminaries of this movement is Roman Catholic Trappist monk Thomas Merton, whose spiritual influences included Aldous Huxley (“Darwin’s Bulldog”). As Jackie Alnor points out in our Journal article, “Thomas Merton: The Contemplative Dark Thread” (beginning on page 8), his influences were varied:

Merton was a believer in all religions – he created his own syncretistic brand of religion while remaining under the authority of the Roman Catholic Church. He gave equal attention to the mystical traditions within Catholicism, Zen Buddhism, and Hinduism. But he was an equal-opportunity Mystic who was drawn to the common thread of “…Satan’s so-called deep secrets…” (Rev. 2:24) found in all the world’s false religions – including his own. He even delved into the mystical branch of Islam and corresponded for many years with a Muslim Sufi cleric by the name of Abdul Aziz.

A more recent arrival on the scene is the Enneagram. For the uninitiated, our friend and associate, Marcia Montenegro, produced an explanation and history on her CANA website titled, “The Enneagram GPS: Gnostic Path to Self.” As you might expect, it did not originate from sound biblical teaching. It came from George Gurdjieff, a mystic who claimed to have learned it from “the Sufis (a mystical spin-off sect of Islam).” In her article, Marcia introduces the original teachers:

–  George Gurdjieff, an Armenian teacher of esoteric spiritual philosophies, based his teaching on knowledge he allegedly garnered during travels and contacts with secret groups.

–  Oscar Ichazo, heavily involved in psychedelic drugs and shamanism, asserted that he had “received instructions from a higher entity called Metatron” and that his group “was guided by an interior master.”

–  Psychiatrist Claudio Naranjo studied with Ichazo in Chile who also claimed to be using a Sufi method.

–  The Enneagram teachings were passed on to Jesuit Bob Ochs, who then brought it into Roman Catholic circles at the New Age Esalen Institute in Big Sur, California.  Continue reading

Christians Are Mixed Up In…Mysticism by Marsha West

SEE OUR WHITE PAPERS ON ROMAN CATHOLICISM AND CONTEMPLATIVE PRAYER