T.D. Jakes is a master of obfuscation.  This was very apparent in his recent TV interview with Huffington Post’s Marc Lamont Hill.  Thus, a controversy erupted over some of the things he said – and failed say.  That he’s a master of obfuscation was also obvious during the Elephant Room 2 controversy that came about over whether or not Jakes’ view of the Trinity is biblical.  Most people are unaware that he has been associated with modalism, a heretical belief that rejects the orthodox view of the Trinity. For those who are unclear about this, a belief in the Trinity is an essential of Christianity and one of the non-negotiables.  So if a person chooses to deny the existence of the Trinity or rejects the settled orthodox view set forth in Scripture, he/she is not a true Christian.  During the E-2 discussion to clarify his beliefs with regard to the Trinity, Jakes did anything but clarify.  His tap dance made Gene Kelly look like a rank amateur.  Although he tried his best to come across as a true trinitarian, his arguments were unconvincing.  (Daniel Neades makes the case)

There’s more.  Jakes not only denies the Bible’s clear teaching with regard to the Trinity, he preaches the Word of Faith-prosperity gospel which comes out of the metaphysical New Thought teachings of Phineas Quimby.  Word-faith is the belief that  faith is a force and words are the containers of the force.  Words can be used to manipulate the faith-force — name it and claim it.  By manipulating the faith-force we can create our own reality.  Those who hold this view also believe Scripture promises health and wealth which is where we get terms such as “prosperity gospel” and “health & wealth gospel.”  With this in mind, is “Bishop” Jakes a true Christian or a counterfeit?

The answer is that those who are outside the bounds of historic orthodox Christianity are counterfeit Christians.

We’ve given two reasons our readers should be concerned with T.D. Jakes’ theology.  Space does not allow us to probe any deeper.  To find out why this man is considered a false teacher, visit Apologetics Index.

Heather Clark, columnist for the Christian News Network, has written a follow up piece to: T.D. Jakes Comes Out for “Gay Rights” and “LGBT Churches,” Says Position is “Evolving.”  In her new piece she covers some of the controversial comments Jakes made in the HuffPo interview.   Those of you who are unaware of the reasons his remarks caused such a stir will find Clark’s piece illuminating.  One thing he said that caused concern was that he feels it’s a good idea for gay people who profess a belief in Christ to find a church that lines up with their view of what the Bible teaches on homosexuality, “as if there is no right or wrong view,” chided Michael Brown.

So now Jakes is scratching his head over the controversy that erupted over an interview he did that caused some people to conclude that he condones the homosexual lifestyle, moreover his views are “evolving” on same-sex “marriage.” 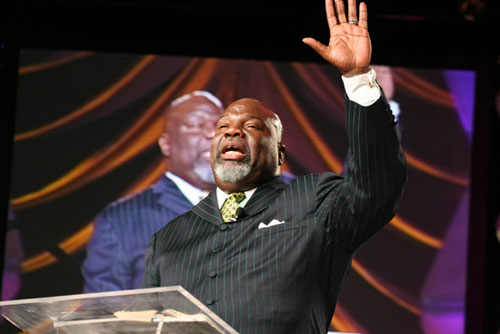 As previously reported, during an interview with the Huffington Post last Monday, Jakes was asked by a viewer if he believes that homosexuals and the black church can co-exist.

“An obvious yes; the Church ain’t turning nobody away,” interviewer Marc Lamont Hill added. “How should the black church and the LGBT community co-exist?”

“I think it is going to be diverse from church to church. Every church has a different opinion on the issue and every gay person is different,” Jakes replied. “And I think that to speak that the church—the black church, the white church or any kind of church you wanna call it—are all the same, is totally not true.”

Jakes said that he thinks homosexuals should find congregations that affirm their lifestyle.

“LGBT’s of different types and sorts have to find a place of worship that reflects what your views are and what you believe like anyone else,” he outlined.

When asked if his thinking has “evolved,” Jakes agreed that it has.

“Evolved and evolving,” he replied. When asked how, Jakes said, “I think that where I am is to better understand we, the church, bought into the myth that this is a Christian nation.”

Earlier this year, the U.S. Supreme Court ruled that states must legalize same-sex “marriage,” igniting a battle between the Church and State over the issue. In his comments last Monday, Jakes advocated for the separation of Church and State, which would allow for “all types of people” to have whatever rights they desire despite biblical prohibitions. He said that politics don’t need to be based on Christianity.

“[O]nce you get past [thinking America is a Christian nation] … Once you begin to understand that democracy—that a republic actually—is designed to be an overarching system to protect our unique nuances, then we no longer look for public policy to reflect biblical ethics,” Jakes explained.

“If we can divide—or what you would call separation of Church and State—then we can dwell together more effectively because atheists, agnostics, Jews, all types of people, Muslims, pay into the government. The government then cannot reflect one particular view over another just because we’re the dominant group of religious people in [this] country because those numbers are changing every day,” he asserted. “We need a neutralized government that protects our right to disagree with one another and agree with one another.”

“That’s outside the Church,” Hill remarked. “Inside the Church, has your thinking shifted biblically, Scripturally, hermeneutically at all? The reason I ask that is because I talk to a lot of ministers now …. and one of the questions [at a recent African meeting] was, is there a way to approach Christian tradition—Christian Scripture—in light of a new understanding of LGBT?”

Hill then pointed to the issue of slavery, and that “irrespective of what [biblical] text says literally, we don’t support slavery as a body.” He asked if there was likewise “room for that same kind of shift” when it comes to homosexuality.

Jakes said that he believed that the shift needed to occur “behind the closed doors of the church” to avoid being called names by society for disagreeing on the matter. He added moments later that the issue of homosexuality is “complex.”

“Paul spends a lot of time wrestling back and forth, trying to understand should a woman wear a head covering, should you cut your hair,” Jakes stated. “I mean, they grappled back then and we’re grappling now because we’re humans and we are flawed and we’re not God.”

“Once you understand you’re not God, you leave yourself an ‘out’ clause to grow,” he said.

JAKES ‘SHOCKED’ BY HOW COMMENTS WERE PERCEIVED

Following Christian News Network’s report on Jakes’ statements, he shot back on Facebook, remarking that he was “shocked” at how his comments were interpreted, but reiterated that while he personally disagrees with homosexual “marriage,” he “respects” the government’s provision of it.

“My comment on HuffPo TV drifted into issues of the Supreme Court ruling and changing the world through public policy versus personal witness. Further, I have come to respect that I can’t force my beliefs on others by controlling public policy for tax payers [sic] and other U.S. citizens,” he wrote.

“Jesus never sought to change the world through public policy but rather through personal transformation. All people didn’t embrace him either,” Jakes continued. “That’s what I said and what I meant …. Nothing more and nothing less.”

He contended that when he used the phrase “evolved and evolving” in response to Hill’s question, he was only referring to the methods used to minister to homosexuals, not his position on the issue.

“When asked about the ‘black church’ and its role in ministering to gay people, I briefly mentioned (we were running out of time) the word ‘evolved and evolving’ regarding my approach over the 39 years of my ministry to gay people who choose to come to our services,” Jakes wrote. “I simply meant that my method is evolving—not my message.”

“I was shocked to read that this was manipulated in a subsequent article to say I endorsed same sex marriage! My position on the subject has been steadfast and rooted in Scripture,” he continued.

However, it was rather Jakes’ remarks in support of the government making provision for “all types of people” to live as they wish outside of “biblical ethics” that raised concern about his views on the issue.

Jakes concluded by stating that although he personally opposes same-sex “marriage,” he “respects the rights” given to homosexuals by the U.S. government—as he had outlined during the Huffington Post interview.

“For the record, I do not endorse same sex marriage but I respect the rights that this country affords those that disagree with me,” he remarked.   Continue reading

Elephant Room 2: May We Now Regard T.D. Jakes as Trinitarian and Orthodox? By Daniel Neads

Does the Bible Really Say We’re Not to Judge? By Marsha West