Is presidential hopeful Ted Cruz a true “Blood Moon New Apostolic Reformation Destiny Anointed lunatic” or is he simply soliciting the vote of these folks?  According to a piece over at Pulpit & Pen, Cruz’s father, Rafael Cruz, who’s  been involved in “ecumenical political activism” for many moons, has ties to Word of Faith wolves Benny Hinn, James Robison and John “Blood Moons” Hagee, as well as NAR/dominionist (and pal of New Age Mormon Glenn Beck), “historian” David Barton. So, is this a case where the apple doesn’t fall far from the tree?  Discerning evangelicals would like answers before casting our vote.

“For our citizenship is in heaven, from which also we eagerly wait for a Savior, the Lord Jesus Christ;” Philippians 3:20 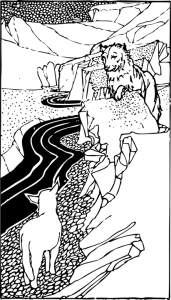 “Beware of false prophets, who come to you in sheep’s clothing but inwardly are ravenous wolves.” Mat. 7:15

While the Evangelical Intelligentsia are falling all over themselves to promote Roman Catholic GOP presidential candidate Marco Rubio and curb the enthusiasm of candidate Donald Trump’s evangelical supporters, another spectrum of evangelical power brokers are getting familiar with Southern Baptist GOP presidential candidate Ted Cruz.  To my knowledge, the Pulpit & Pen’s very own innovator of nomenclature, JD Hall, hasn’t yet coined a term for this particular group of evangelicals.  They are the crowd who believes in David Barton’s discredited revisionist history, Blood Moons, Shemitahs, 7 Cultural Mountains, and Israel-obsessed Hageean dual-covenant dispensationalism.  Unlike the Evangelical Intelligentsia, they are not social justice-minded intellectual elites.  To the contrary, they aren’t very intellectual at all.  However, they do have big money and significant influence.  If Cruz’s father, Rafael, is to be believed, Cruz was anointed to receive.  As 2015 came to a close, Ted Cruz met with hundreds prominent faith leaders (including David Barton, James Robison, and John Hagee) at the ranch of Texas tycoon, Farris Wilks. Farris and his brother Dan have donated $15 million to a super PAC which supports Cruz. Cameras and recording devices were not allowed at the Wilks ranch when Cruz spoke, so only God and attendees know what was said at the event.  However, one might be able to get an idea of how Cruz views God’s role in American politics by reviewing his associations.

Watch the video provided by P&P and continue reading

READ OUR WHITE PAPER ON WORD OF FAITH, ALSO NAR/DOMINIONISM

Berean Research reports a range of views. The opinions expressed on this blog are solely those of each individual author.