In an article I penned in 2010 titled A subtle and dangerous shift in Christianity I expressed my concerns over churches that were offering “Christian yoga”:

It seems everyone’s practicing yoga meditation these days. Physicians recommend it to their patients which means it’s beneficial…right? Meditation is said to relieve stress, anxiety, hypertension, acne and post-nasal drip, so go for it! Just tighten those abdominal muscles, inhale deeply and chant Maaaaaaaaa all in one breath and your concerns will drift away like a feather floating on the wind…

But what if you’re a Christian? Should you practice the same sorts of things as Buddhist, Hindus and New Agers?

Former New Ager Marcia Montenegro believes that Christians who practice yoga–even “Christian yoga”–shouldn’t.  In an article Marcia wrote for Midwest Christian Outreach, she brings to light the spiritual dimension of yoga that, in her words, “should not be ignored.” Marcia has given Berean Research permission to publish her piece. 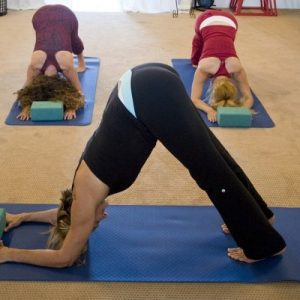 The Basic Spirituality of Yoga

Yoga is one of the most popular topics I am asked about when I speak in churches or at conferences. I twice practiced Hatha Yoga at separate times while participating in the New Age for about 20 years, prior to coming to a saving faith in the true Jesus Christ. At that time, Yoga was primarily understood as a spiritual practice even though it was beginning to slowly branch out into the secular world.

I watched as Yoga migrated further into mainstream culture as “exercise,” cleverly marketed in such a way that the image of a woman doing a Yoga pose (asana) or sitting in the Lotus position became the norm, and was always associated with health, beauty, peace, and strength.

The Yoga being discussed here is Hatha Yoga, only one of many Yogas. Yoga, as a whole, is a complex esoteric system oriented toward attaining liberation from a false reality and uniting with the ultimate reality or god (however that god may be perceived). Hatha Yoga, meaning “Sun” and “Moon,” is a practice whereby the body becomes a deliberate tool for this path to a purported enlightenment; that is, becoming more spiritually aware of the true inner divine Self and the need for liberation from this life. The concept of Sun and Moon also represents the goal of uniting opposites into one, based on the belief that there are no real distinctions, but that all is truly one (in non-dual Hinduism; there is dualistic Hinduism which teaches distinctions). So, we cannot even get away from spirituality when using the name “Hatha Yoga.”

“The word hatha is itself an indication of the goals and objectives of this practice: hameans “sun,” and tha means “moon.” Thus, “hatha yoga” is the practice that enables a practitioner to balance his or her solar and lunar energies.” (From Yoga Journal article “What is the Purpose of Asana?”)

Indeed, the word “Yoga” itself means “union.” But it is not union of body and mind, according to the popular adage. Although defined in various ways, the classic meaning is union of the Atman, or inner divine self, with Brahman, the supreme Hindu god (or one Hindu god who manifests as many gods). Yoga is also defined as awakening to and union with the “higher self” or “higher consciousness” in New Age terms, which is the realization of the inner divine self.

Hatha Yoga, popular today from the corner gym to boutique studios peppering every city and maybe even every town, is also a part of Kundalini Yoga. Kundalini, as with all Hindu concepts, is layered with complexity; but, essentially, it is believed to be an invisible energy coiled at the base of the spine. Awakening this energy through meditation and certain Yogic practices is a spiritual work.

“Exercising postures or Asanas in Hatha Yoga has two essential objectives. The first is that to practice any real meditation, one needs at the least one posture in which one can be perfectly comfortable for a longer period of time. The more such postures one can master, the better the basis for developing the inner meditation techniques. The second objective of exercising asanas in Hatha Yoga is to bring health and energy to body and mind by opening the nadis.”(“Hatha Yoga” )

The nadis are allegedly “subtle” channels in the body through which flow Prana, the sacred energy of the universe (“subtle” means they are invisible). The so-called breathing techniques of Yoga, Pranayama, as well as the poses – the asanas — are meant to open these channels so that the energy of Kundalini can flow through and vitalize the person on all levels, especially spiritually. In Eastern spiritual practices such as Yoga, Qi-Gong, and Hindu meditation, breath is considered to be sacred and to be a link to a divine source. This is why Pranayama is essential in Yoga. The concepts and terms are all so interconnected, that it is difficult to detach them from each other. Explaining one leads to a necessity in explaining another, and another after that. There is no real end to it. It is like grabbing the end of a string and pulling on it, only to discover that the string is part of a tangled web that can never be unraveled. This is how I see Yoga.

Some asanas honor mythical Hindu heroes or Hindu gods, such as the warrior pose, done to honor the Hindu god, Shiva, who created a warrior, Virabhadra, to avenge the death of Shiva’s wife. Another asana, lying on one’s back with split legs, honors Hanuman, the monkey god (see “The Heroes, Saints, and Sages Behind Yoga Pose Names”).

Chakras, which means “wheels,” are allegedly invisible energy centers ranging from the pelvic area to the top of the crown (sometimes the crown chakra is said to be an endpoint and not a chakra). Each one is correlated to a specific purpose but needs to be activated by kundalini. The asanas are done partly to prepare the chakras for the kundalini.

Yoga’s popularity has turned “chakras” into an almost everyday word. Once a little-known term used in the New Age and the occult, it now is liberally sprinkled in the language of alternative treatments, meditation, and even health advice. Chakras are assumed to exist, even though they don’t. The concept is entirely spiritual.

Yoga no longer hides its spirituality as forcefully as it once did. Presenting it as mere exercise has concerned and angered some practitioners and many Hindus, who are calling for it to be brought back to its proper spiritual standing. Several years ago, I noticed that the popular Yoga Journal was including more spiritually oriented articles, including chants to Hindu gods.

Tokens of Eastern spirituality, like drawings of Ganesha (a popular Hindu elephant-headed god) on clothing, and the Aum (Om) design as a tattoo and printed on clothing and totes, have become widespread. The Aum/Om symbol (looks somewhat like a backward capital E with embellishment) is considered to be a sacred sound that has a spiritual effect on the person chanting it and is said or chanted in some Yoga classes.

As we see from the information, the main terms used in Hatha Yoga are spiritual or are connected to the vast network of Hindu spiritual beliefs:

Like other arcane systems, Yoga is endlessly complicated and convoluted. But just touching on the essentials of Yoga practice reveals a spiritual dimension, hidden to most, that should not be ignored. Can we do Yoga as exercise without the spirituality? I would rephrase that as: “Can we get close to a fire and not get burned?” Maybe, but why try? There are numerous ways to exercise without getting near Yoga.

The world is captivated by the idea of prolonging youth and health, and Yoga feeds on that. But all of that will come to a crashing end for everyone. The basics of Yoga are a non-Christian and non-eternal spirituality, but Yoga itself is not basic to life, and certainly does not compare to the eternal life and the glorified resurrected body through faith in Christ.

On the other hand, discipline yourself for the purpose of godliness; for bodily discipline is only of little profit, but godliness is profitable for all things, since it holds promise for the present life and also for the life to come. (1 Timothy 4:7b-8 NASB)Ω

© 2018, Midwest Christian Outreach, Inc. All rights reserved. Excerpts and links may be used if full and clear credit is given with specific direction to the original content.

READ OUR WHITE PAPER ON YOGA