Posted By Marsha West on January 6, 2016 in Church of Jesus Christ of Latter-day Saints (Mormonism)
Share

In the headlines for several days is Burns, a small town in rural Oregon where a standoff between an armed militia and the United States Federal Government is in progress.  The leader of the militia is Ammon Bundy, along with his brother Ryan and several other militia members who are believed to be from Arizona and Nevada.

When the the Bundy militia took up arms against this nation, they declared the United States to be irredeemable and its government to be illegitimate.

what many in the media have missed is what is there right before our eyes, and that is this, there is a very interesting theological dynamic and a theological worldview behind this militia and its members. The first key, the first clue to understanding this, is the fact that the spokesman for the militia identifies himself as Captain Moroni. Anyone with the slightest familiarity with the book of Mormon, with Mormon history and theology will recognize immediately the name Moroni.

Mohler points us to a piece John Sepulvado wrote for Oregon Public Radio where we learn just who this Captain Moroni is and what’s behind the militia’s worldview. Sepulvado writes: 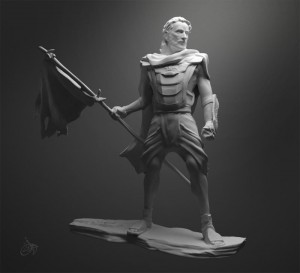 That’s how one militiaman at the Malheur National Wildlife Refuge responded to OPB’s Amanda Peacher when she asked for his name.

That name is not a silly response to deflect responsibility: In many ways, it encapsulates a deeply intertwined anti-federal sentiment mixed with Mormon symbolism. Captain Moroni is a crucial figure in the Church of Jesus Christ of Latter-day Saints. He’s also a heroic figure for anti-federalist extremists.

In the modern day west, Captain Moroni has become one of several powerful symbols for the Bundy militia’s anti-governmental extremism.

Who Is Captain Moroni?

According to LDS scripture, Captain Moroni took command of the Nephites when he turned 25. Moroni innovated weaponry, strategy and tactics to help secure the safety of the Nephites, and allow them to worship and govern as they saw fit.

In LDS texts, Moroni prepares to confront a corrupt king by tearing off part of his coat and turning it into a flag, hoisting it as a “title of liberty.” This simple call to arms inspired a great patriotism in the Nephites, helping to raise a formidable army. Vastly outnumbered, the corrupt king fled. According to the Book of Mormon, Captain Moroni continued to push for liberty among his people.

“And it came to pass that Moroni was angry with the government, because of their indifference concerning the freedom of their country.”

“And it came to pass that Moroni was angry with the government, because of their indifference concerning the freedom of their country.”

An Embrace Of The “Title of Liberty”

During an April 2014 standoff with federal officials, supporters and members of the Bundy militia cited Book of Mormon passages centering on Captain Moroni. There were also several flags quoting Captain Moroni’s own writing on his “title of liberty.” Often next to American flags, these banners read “In memory of our God, our religion, and freedom, and our peace, our wives, and our children.”

Cliven Bundy – the Nevada Rancher who called on militia and anti-government forces to help him in the showdown with the Bureau of Land Management – cited his own Mormon faith as a reason for what he viewed as a favorable outcome. As quoted by the Salt Lake City Tribune:

“If the standoff with the Bundys was wrong, would the Lord have been with us?” he asked, noting no one was killed as tensions escalated. “Could those people that stood (with me) without fear and went through that spiritual experience … have done that without the Lord being there? No, they couldn’t.”  Continue reading

Ted Cruz Appears at Evangelical-Backed Political Event with John Hagee and David Barton
On Discerning Ravi Zacharias: It’s time to say what needs to be said