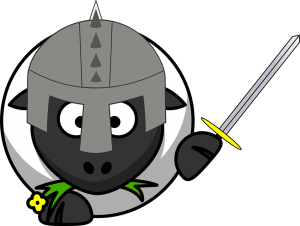 “Put on the whole armor of God, that you may be able to stand against the schemes of the devil.” Ephesians 6:11

In it, he states logically and simply that if people would simply stop accepting at face value the proclamations of celebrity pastors and the like that they are Christians, lives would be made easier, and minds would be more at ease.

In summary, Mr Chantry said that when a megapastor, such as the types like Mr Furtick, Mr Driscoll, or Mr Stanley, teach something that isn’t in the Bible, or otherwise make an outrageous statement, the thinking goes something like this:

When well-recognized evangelicals – particularly those who have never made any significant contribution to or defense of biblical doctrine and piety – make asinine statements about the gospel or engage in stunts which contradict all the tenets of Christian virtue, why do we feel the need to cover their indiscretion with a cloak of good Christian motives? They themselves rarely seem to desire this! The complex logical gymnastics by which we defend the men while questioning their words and actions are based upon one obstinate presupposition: because these men are evangelicals, they must be received as brothers in Christ and granted every advantage of our most gracious instincts. This is, I suggest, a needless assumption which we ought to simply shave away. A great many evangelicals are simply not saved.

You know, most people who say they’re saved, are not saved. Am I pessimistic? Is Mr Chantry mean? Do I propose to “judge the heart”? Is he “judging their motives”? No. Jesus said that many go on the broad way to destruction and few find the way to salvation. (Matthew 7:14). Jesus followed that statement immediately in the next verse, saying

Watch out for false prophets. They come to you in sheep’s clothing, but inwardly they are ferocious wolves. (Matthew 7:15)

In the New Testament ‘false prophets’ are pastors, a word we’re more familiar with today. Or they are teachers.

If someone says to me that they are saved, I don’t dismiss their statement, of course. But I do not accept it at face value, either. I listen to testimony, I watch for fruit, I reserve comment or opinion on their self-proclamation until I see one way or another which way their wind blows. That takes time.

And even then, if the person is a layperson, I rarely come to a final conclusion, because I can never be 100% sure, unless they overtly deny a foundational doctrine. Jesus will make that pronouncement on His day. Only if someone is a pastor or teacher at the highest levels with a following or influence, and they say something incontrovertibly against a foundational doctrine, (like when Billy Graham says we can go to heaven without knowing Jesus; or the wild abuses against the Spirit of Benny Hinn or Joyce Meyer, or the greed with which a Joel Osteen bows to Mammon), then it’s understood in my mind that someone with the Holy Spirit in them would never teach that or say that. Ever.  Continue reading

One Response to Three signs of a believer