Timothy C. Morgan, columnist for Christianity Today, has the not so surprising story of the break-up of a marriage that came about because both the husband and the wife committed the sin of adultery: 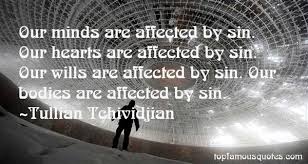 Tchividjian resigned as senior pastor of Coral Ridge Presbyterian Church in Fort Lauderdale earlier this summer after admitting an extramarital affair. He has since lost his ministerial credentials.

There was little public information available about the divorce filing. Under Florida law, one party must establish that the marriage is “irretrievably broken” in order for the union to be dissolved. Tullian and his wife, Kim, married in 1994 and have three children.

Tchividjian, who is the petitioner in the case, did not respond to a request for comment. Today [Aug. 26], author-pastor Paul Tripp, a friend and counselor to Tchividjian, said in a statement that for six months much effort was made in “hope of healing the marriage,” but he said it was too “deeply broken.”

On August 11, the South Florida Presbytery of the Presbyterian Church in America (PCA) deposed Tchividjian, ruling him unfit for Christian ministry.

Tchividjian must display an “eminently exemplary, humble and edifying life and testimony” for an extended period of time before he can return to ministry, according PCA’s Book of Church Order.

The presbytery says it will continue to offer pastoral care to Tchividjian:

Our goal in doing this is to both protect the integrity of the church from which his credentials were given while, at the same time, wrapping Tullian in the grace offered by Jesus Christ to all those who confess sin, pursue repentance and desire restoration.

The church explained that decision in an online statement:

In order to continue to protect Pastor Tullian and his family, as well as the integrity of the message he preached, we have decided to pull his sermons for the foreseeable future. Unfortunately, we have already seen the misuse of his messages in the media and on the Internet. We will be prayerfully considering how and when they can be available again at an appropriate time so that they can be used to declare and demonstrate the liberating power of the Gospel. We appreciate your patience and prayers during this time.  Continue Reading

One Response to Tullian Tchividjian Files for Divorce